In 2019, video marketing has become a powerful marketing strategy for almost every business. Whether you are running an old business or a new start-up, the power of video marketing can’t be underestimated.

If you look at the numbers then, as per Google, more than 75% of the content on the web will be in the video format by the end of 2012. So, not using video marketing for growing your business can cost you a lot. 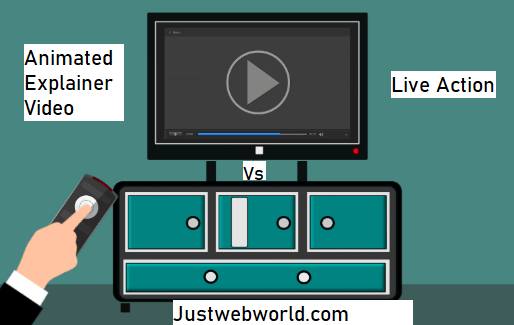 If you have already understood the power of video marketing, then you may be wondering from where to start? Which type of videos should you produce to promote your business?

There has been a lot of confusion in business professionals about using different types of videos.

Now, let us see whether animated explainer or live-action video works best for your new business.

The cost of animated explainer and live-action video

So, you have decided to utilize video marketing, and the first question that will be in your mind is cost. Cost for creating both animated explainer video and live-action video is different. Let us compare both of them.

You can write the script on your own or can hire professional scriptwriters for writing an excellent script.

Now, if you have a limited budget, then try to write the script on your own. Once your script is ready, you can start creating your explainer video.

Creating an animated explainer video is quite challenging for newbies. But there are some software tools available in the market that you can use to create your video. The cost of most of the tools is below $100.

From the recent reports, it has found that the lowest cost for producing a 60 seconds explainer video in the animated format is around $700 while the highest price is $72,000.

The cost might vary depending on the quality of the video.

You can get your animated explainer video for cheap, but the quality of that video will also be below average.

The process of making a live-action video also starts with the script. But, in the live-action footage, you require people that are confident and can speak effectively in front of the camera.

The cost of producing live-action video depends on the cast, camera, location and many other things. And this cost will be way higher than the animated explainer video.

If the studio is not available, you can use your home or your office place for recording a live-action video.

With an animated explainer video, you can bring any imagination into reality.

If you want aliens chasing your product or service then, it is possible in an animated explainer video. So, you can stretch your imagination to the infinite levels for creating a video that you want.

You can use various online tools to create logo animations in just minutes. With an animated explainer video, you can explain complicated concepts in a better way.

As animated videos are easy to create, you can make changes whenever you want. You can change the colour of character or the entire character at any point.

After doing many revisions, you will get the video that you want.

It might take from a few days to weeks for creating a perfect animated explainer video. The time needed for creating such video will depend on the type of video you want, audience and budget.

If your budget is low, then, you have to make the video yourself or have to hire a freelancer for cheap that delivers quality work. If you have money to invest, then, you can contact a professional company for making your animated explainer video.

The human touch present in the live-action video is absent in any other type of video. Whenever someone purchases your product, customers invest their money as well as trust.

You can convey your message very effectively to your audience with the help of real humans.

So, having real people in videos plays an essential factor while selling your product.

Shows the actual working of your product

Suppose you are selling a physical product, then your customers are more interested in seeing its actual working.

They are not curious about seeing a video that tells product features.

With a live-action video, you can tell about your product effectively by brining real humans in action.

You can easily create a live-action video at a much more rapid rate than the explainer video. As almost everything is ready, you have to shoot your video and produce it.

Sometimes, you may face some difficulties, but you don’t have to think a lot while making such a video.

You can sell using story-telling

Usage of the art of story-telling has been one of the most trending marketing strategies. As per human nature, we believe in stories. So, make sure you are using stories while selling your service through live-action videos.

If you think of making a live-action video again, then be prepared to invest your time as well as money on the cast, location, place, etc.

So, revising such videos is very hectic work. You may not find the proper place or your previous cast while reshooting the same video.

You can only edit the video, but re-recording the video is very complicated.

You can’t do anything

If you want to introduce superheroes flying in the sky in your video then, live-action video is not for you. While creating a live-action video, you can’t imagine anything. You have to think realistic and then have to write a script on it.

Thus, we have compared both animated explainer video and live-action video.

If you have a new business and wanted to sell a physical product like a refrigerator or TV then, definitely go with a live-action video.

You may have to invest big bucks on it, but it will give you more sales and bring more revenue.

On the other hand, you can use animated video for selling software tools, digital products, etc. As a business owner, you might think, can we use both these video types for growing your business?

Yes, you can use both of them. If you have money to invest, then try both and see the result.

After seeing the result, you can dominate your industry with only one type of video as your marketing strategy.

That’s all about both these video types. So, you can either choose a live-action video or animated explainer video depending on your business, budget and your customers.

In the end, it all depends on your creativity and marketing strategies. If you can plan and execute your strategy well, then any one of the above can do wonders for your business.