Everyone has got ideas, while some among them are decent, others are not that good. Although your idea might be great, all great ideas can’t lead to a successful startup company.

Do you think you have what it takes to become an entrepreneur? If answered yes, here are few startup quotes that will boost your spirit through your journey. 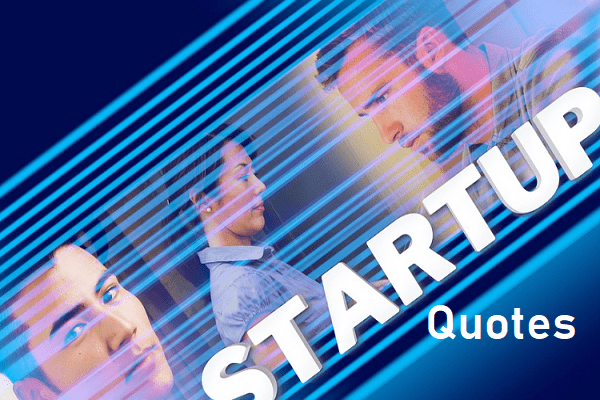 1] Take a chance even though that’s scary!

I knew that if I failed, there wouldn’t be anything to regret but I knew one thing I might ever regret is not trying at all.

Even though you may not have the appropriate idea to start off with, you can still adapt.

2] Explore the market to know where you fit in

Anytime can be considered as a great time to start a company.

If there are too many competitors in the market, even if you seem to be the best, it’s much tougher to win.

3] Know how to draft your product

If you simply work on things that you like and you’re passionate about, you don’t always require a master plan about things will turn out.

The secret of getting ahead is to get started. The secret to getting started is breaking your complicated overwhelming tasks into smaller manageable ones and then starting with the first one.

Ideas are commodity. Execution of ideas is not.

For ideas, usage is like oxygen. This means every moment you work on some task without it being in public, it is actually dying. It is being deprived of the oxygen of the real world.

Writing code? That is the easiest part. Placing your application in the hands of users and creating applications that people actually want to use is the hard job.

Grab the customers first, then build the tech. Never do it the other way round.

Make something that people will want and this also includes forming a company that people would love to work for.

The ideal founding team is two people, with a history of working together, of similar financial standing and age, with mutual respect.

The secret to successful hiring is to look for people who earnestly want to change the world.

6] Time to move from concept to product

Be apprehensive of any work that is not building your product or grabbing customers. It’s easy to get trapped into an infrastructure rewrite death spiral.

As against waiting for an appropriate product, you should be eager to launch a minimum viable product, the thinnest product and then you iterate and develop.

Ideas are easy to come but implementation is hard.

Learn not to add too many features at the same time, get the core idea built and tested.

Talk to your customers and find out what they’re looking for. Don’t pay heed to the competition as that is not relevant to you.

Without proper data, you’re simply another person with an opinion.

You’ll learn more while talking to customers than a week of brainstorming, a month of watching competitors or a year of market research.

Anything that is measured and supervised, improves.

Data might disappoint you at times but it never lies.

A successful product is never perfect. It is a constant process of assessing the landscape, making tough choices and accepting the trade-offs.

I’m convinced that around half of what differentiates the successful entrepreneurs from the non-successful ones is sheer perseverance.

If you don’t need funding, don’t keep worrying about it. Nowadays, it is cheaper to start off with a business than ever.

Bootstrapping will always help you remain honest. It offers you a clear path towards designing strong product because if you don’t build what people need and want, the money will stop coming in.

Bootstrapping is a way of doing something regarding your problems you have without having to seek permission from someone to do them.

10] Get fund to move further

Investors are your employees whom you can never fire. You can choose investors that you think like you.

It is usually tougher to raise capital than what you thought it would be and it takes longer than ever. Hence plan for that.

So, if you’re looking forward to starting your own business and yet you’re not getting the boost from within, try and motivate yourself by reading and believing in the quotes mentioned above.

It takes lot of hard work, money, dedication, sleepless nights and also some failure to become an entrepreneur.
Infographic brought to you by Wrike multiple project management software.