Carrie Underwood is a personality rose to fame by winning the American Idol in 2005, and she remained one of the top-selling artists in the country music category. 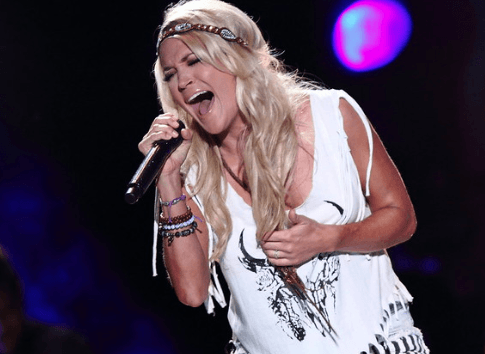 The singer blessed with two older siblings Shanna and Stephanie, who accompanied and inspired her throughout life. She sang at Robbins Memorial Talent Show, Baptist Church and local events. The young singer had the talent required to make it big since childhood

Singing never earned beard to the young Carrie, and it did not work out well in the real world as well. The dream of becoming a national singer remained a dream for her until high school. The young singer decided to give up on college and move on to pursue her passion for singing.

In 2006, Underwood earned a degree in mass communication and journalism from Northeastern State University in Tahlequah, Oklahoma.

In the summer of 2004, a singing contest held the audition in St. Louis, Missouri and the entire family encouraged the young talent to participate in it. Simon Cowell praised Carrie after performing “Could’ve Been” by Tiffany on the top 12 girls night. The skeptical judge said that she is one of the favorites to win the competition.

Ultimately, Underwood advanced to finals beating the finalist Bo Bice with the majority of the votes. The season 4 winner of American Idol awarded with multi-platinum debut album “Some Hearts (2005)” released in the same year.

She went on winning an Academy of Country Music (ACM) awards, numerous Grammy awards, and more.

American Idol fame earned an opportunity for the debut album and Some Hearts (2005) released. The first single, “Inside Your Heaven,” touched the hearts of millions of people and it topped at the Billboard pop charts. In a few days, it was recorded as multi-platinum album and fastest selling country album competing with Nielsen SoundScan record in 1991.

Spent my morning with my cowboy and our horses! 🤠+🐴=😊 #TooManySelfies pic.twitter.com/MNpKFf5bHt

The next track “Jesus, Take the Wheel,” took Carrie career to another level and winning her ACM and CMA awards for Single of the Year.  Fortunately, the Grammys jury did not ignore her. And she went on earning Best Female Country Vocal Performance and Best New Artist awards.

Underwood did not lose the pace at all in coming years and she was able to repeat debut success with with “Before He Cheats.” The single earned the country singer CMA Award for Single of the Year and Grammy for Best Female Country Vocal Performance in 2007.

After earning another Grammy, she released follow-up album “Carnival Ride” and it topped the album charts. Single tracks like “Last Name” and “All-American Girl” played a major role in topping the charts.

Country star Garth Brooks inducted Underwood into the Grand Ole Opry making her the youngest member of the institution. In the same year, she earned CMA Award for Female Vocalist of the Year for the third time in a row. However, she could not secure a win for Album of the Year losing to George Strait. The country singer kicked off the CMA Awards with fellow country star Brad Paisley as a host.

Carrie took a long time to release third studio album “Play On” and it sold over 1.4 million copies by the end of the year. The album had three single hits “Good Girl,” “Blown Away” and “Two Black Cadillacs.”

Underwood spent a long time in the industry and she realized Hollywood, entertainment industry, and Television industry as a potential alternative career. Carrie took measures to secure her future in the industry by working on additional projects apart from music.

In May 2013, it was announced that Underwood would be taking the reins from fellow country star Faith Hill to perform the weekly Sunday Night Football theme song, “Waiting All Day for Sunday Night.”

Carrie approached by Television series producer with a role “Maria” to play alongside True Blood star Stephen Moyer. The singer could not reject it as the show is about “The Sound of Music.” The live broadcast followed the 1959 musical and it earned four Emmy nominations.

From a country girl to a successful country singer, and Greatest Hits: Decade #1 in the fall of 2014 released to celebrate the remarkable career. A Grammy for Best Country Solo Performance awarded to Carrie in 2014. The popular country singer took a few years to release fifth studio album “Storyteller.” The single “Smoke Break” listed in top five in country music list.

Underwood has a total net worth of $65 million. She has the highest net worth an American Idol winner had in the history books. The country singer does not seem to put an end to the music career. Carrie determined to create more music in distant future.