Homepage » Amusement Park » How Does the Pirate Ship Ride Work?

You all are familiar with the pirate ships that had been used for trade and travel worldwide. These ships were of ordinary type and sowed with the help of the air. 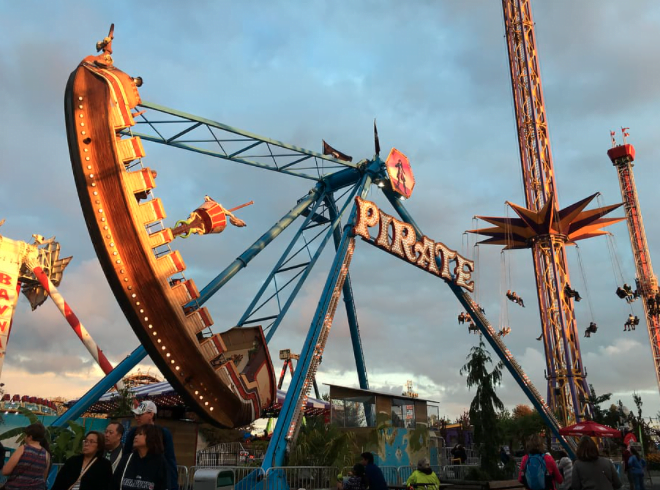 What is a pirate ship ride?

You are seeing a picture of an ordinary pirate boat. If you ever have gone to the park, you will have watched the ship swings built on this design. These are called pirate ship ride or Viking ship ride.

A pirate ship ride is a type of enjoyment ride based on the pirate or Viking ships. It consists of an open large or small gondola. The gondola has seats for the passengers and moves back and forth around the horizontal or x-axis. During this movement, the riders undergo various levels of angular momentum.

It starts swinging from its slow state to a fast state that makes the riders feel like to be in a stormy ocean.

The pirate ship ride consists of.

It is an exciting and classical amusement ride and is favorable for all kinds of amusements, either outdoor or indoor.

How does the Pirate Ship work?

A three-phased AC source uses reducers to run caster for the to-and-fro motion of the pirate ship ride. When the big caster body and boat-body come in direct contact, the spinning caster wheel rubs the bottom of the boat-body.

This makes the ship swing higher in a short time-lapse. The boat arrives at its top height and then moves back due to the action of gravitational force.

When the ship-body comes in direct contact with the caster wheel for the second time, the caster’s movement is reversed, which makes the ship-body move in the opposite direction. The ship arrives at the highest point and moves towards the ground due to gravity acting on the ship.

This system consists of.

The total power switch helps to enter the power supply of three-phased 380V into the electrical control box. Following are the stages that are involved in running the electrical system of the pirate ship.

People like to have a pirate ship ride due to the following reasons.

JINBO Ride is a Chinese branded company that is providing its services all over the world. It manufactures different amusement sources of different styles. It sells a large variety of pendulum rides such as Ferries wheels, Pendulum ride, and Viking ship rides, etc.