Home » Health & Fitness » How Plastic Pollution Is Impacting Your Health

Walk along any river bank, beachfront, or marine location, it’s near-guaranteed you will find at least one piece of plastic. In Australia, we use 3.92 billion plastic bags each year, or 170 bags per person, showing the scale of the challenge we face. 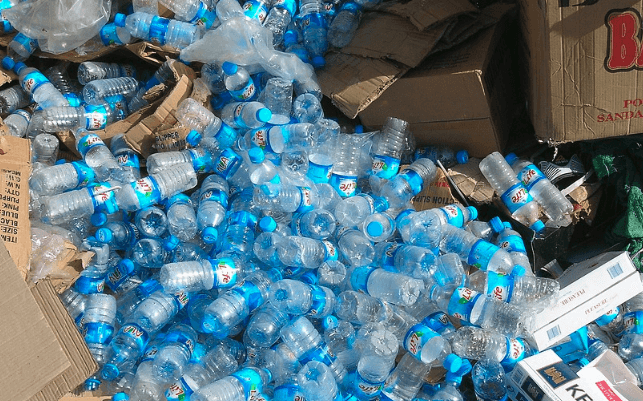 We now use plastic in most parts of our lives, and it’s having a devastating effect on the environment. Not only do 8 million tons of plastic enter our oceans every year, but the material breaks down into ever-smaller pieces with micro-plastics eventually finding their way into the food chain.

We’re polluting the oceans, destroying natural marine habitats and causing untold damage on our own health.

On recent estimations, upwards of 100,000 marine mammals are killed every year as a result of eating plastic. The sight of a dead animal washed ashore is no longer a shock: whales, turtles, dolphins and other marine life are ingesting a stomach-full of plastic, before suffocating, then washing up on shorelines.

Nearly 700 marine species are directly affected by our habits on land with 10,000 turtles thought to have died off Australian coastlines in the last decade alone due to discarded fishing nets.

The heads of the United Nations Environment agency warn of an impending ‘Ocean Armageddon’ unless we phase out our reliance on single-use items such as bags, bottles, straws, and cutlery.

Scientists exploring the deepest ocean trenches in Japan, the Hebrides, and Chile have found plastics in every nook.

More worryingly, when testing the wildlife that lives there, 100% of creatures in one spot had plastic in their gut; while the best results noted a mere 50% of animals were shown to have ingested the contaminant. So, plastic not only sinks to the depths of the ocean, it directly impacts the marine life that lives there.

It seems we are still a long way from achieving the circular economy in which we re-use and recycle most items, instead of disposing of them straight into landfill.

2] How Much Plastic do Humans Consume?

Researchers at Columbia University’s, Lamont-Doherty Earth Observatory recently studied the digestive tract of market-bought shrimp to ascertain what it had consumed. A small application of red dye immediately flagged a startling insight: seven pieces of plastic in the stomach of one shrimp bought for human consumption.

This is not uncommon. Scientists have found plastic fibers, fragments, and micro-beads in both ocean-going and freshwater fish, wild-caught and farmed. With 114 species known to have plastic in their stomachs; more than half of which we freely eat for dinner.

Species such as plankton, bivalves, fish and whales regularly consume micro-plastics as they look just like their food, clogging digestive tracts, impeding appetite, altering feeding behavior and affecting both growth and reproductive capability. It’s not just fish; 85% of Australian seabirds suffer as a result of plastic pollution.

3] How Does This Affect What Is On My Plate?

While the plastic pollution has a devastating impact on marine life, a UN report on the effect on humans concludes people likely consume trivial volumes of plastic.

However, scientists remain concerned. Micro-plastics will eventually break down into nano plastics less than 100-billionths of a meter in size and these are the particles that can penetrate tissues and organs, presenting potential toxicity to humans with severe consequences owing to bio-accumulation in our system.

Research is currently limited by scientific capability, but one thing is clear: we must reduce the volume of plastic entering our lakes, rivers, and oceans to keep it out of our food chain.

4] Which Plastics Should You Avoid?

A plastic bag has an average usable life of just 12 minutes but will survive in the marine environment for hundreds of year seven in the digestive tract of a whale. As shown below, certain items take longer to break down, but all result in the same toxic micro-plastic contamination. 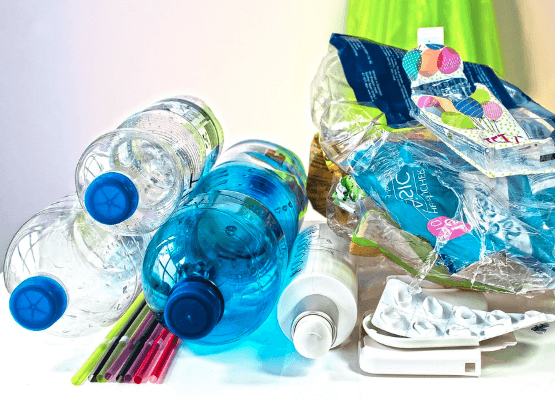 If we re-use plastic, it becomes less of a concern; unless it is the type to contain BPA. Bisphenol A is a hormone-disrupting material linked to autism, birth defects, and reproductive issues.

So, check any plastic you do use and avoid anything suggesting BPA, particularly the children’s cups and bottles which frequently include the compound.

Another way to know which plastics to avoid is checking the number contained in the recycling triangle with the main ones to remove from your routine listed below:

When it comes to which plastics are recyclable, this often depends on your specific location. In general, numbers 1 and 2 are the most readily recyclable materials. They should be rinsed, then disposed of in the appropriate recycling bins for collection by local authorities.

For other numbers, you must check to see if your local facility can process them for recycling. But avoid 3, 6 and 7 as best you can.

5] How Can Organizations Become Eco-Friendlier?

Fixing the situation starts at the top, and so we should set the right agenda to encourage positive behavior.

1] Maximise The Use Of Recycling Bins

Even if plastic is vital to daily operations, we can encourage sustainable behavior by providing recycling bins for plastics, paper, and other waste. If you are concerned about the lack of engagement, implement a policy to ensure those around you make use of the amenities provided.

Food wrappers often use plastic type 3, an endocrine disruptor and possible pollutant, which is not readily-recyclable. If we are forced to purchase lunch from food outlets, this means having to buy single-use type 3 plastics.

However, by getting creative in your kitchen facilities, you can make the most of eating healthy whilst reducing consumption of environmentally unfriendly plastics.

3] Minimise The Use Of Unnecessary Packaging

Whether in the products sold, communications sent, or even at the water dispenser; there are multiple areas you can reduce your reliance on plastic. Minimize packaging where possible, encourage the use of reusable drinks bottles, and provide plates, cutlery, and cups.

Waterlogic a leading global supplier of plumbed-in water dispenser solutions, raise essential questions about our impact on the environment and the affirmative steps we should take to promote sustainability.