Teen Patti is played with a deck of 52 cards, with cards ranking in their regular order, that is, from ace (high) to 2 (low). It is usually played by 4 to 7 players. Teen Patti is very similar to three cards poker.

How to Play Teen Patti Online 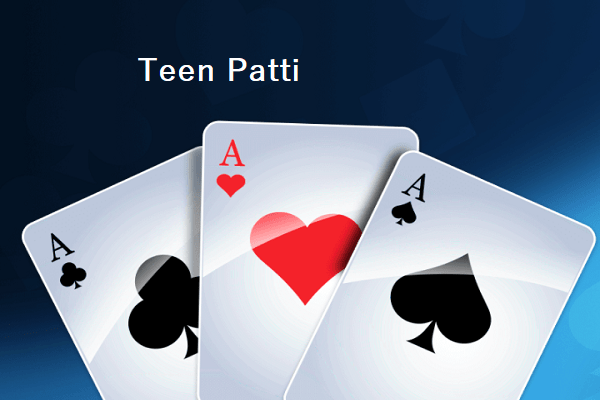 Before the game starts, the players have to agree on the Ante (minimum amount they can place as stake). Every player puts the ante into the pot. The dealer then begins to deal out cards in an anticlockwise direction, until each of the players gets his three cards.

Before betting, each player can choose to either play seen (look at their 3-card hand) or play blind (leave the cards facing down). To win in the game, your 3-card hand must be better than other players’ hands.

To play the game effectively, you need to be aware of Teen Patti rules, how bets are placed, and how cards are ranked. Continue reading to learn more.

Betting is done in a clockwise direction, starting with the player at the left of the dealer. At any point in the game, players can decide whether to stay in the game or quit (fold). When you choose to continue, you have to bet again. But when you fold, you drop out of the game and forfeit any amount you have already wagered.

The amount of bet you place at every point depends on the current stake and whether you are playing blind or chaal.

In betting, you can either call or raise. When you call, you place the same amount as the biggest bet in the game round. When you raise, you place a bet that is higher than every other player’s stake.

The players keep betting in the game and there are only two possible outcomes.

Rules for the show

The players still have to wager for the show. If you are a blind player, you can request for a show by wagering the current stake. This happens regardless of whether the other player is blind or chaal. You must not open your cards until you wager.

If you are a chaal player and the opponent is blind. You cannot demand a show. A chaal player can only continue to bet or fold.

If the two players are chaal, any one of them could request for a show. This is done by making twice the current stake.

During the show, the cards of the two players are exposed. The player with the best card hand wins. If both players have equal card hands, the one who did not request the show wins.

Players can also request for a compromise or sideshow. This is done if both players are seen. Immediately after betting twice the current stake, the bettor requests.

The ranking of hands

Here is how cards are ranked, from the lowest to the highest.

High card – Three cards that are not of the same sequence or suits. The highest card is compared first, then the next highest, and the lowest. The best high card hand you can have is A-K-J while the worst is 5-3-2.

Pair – These are two cards of the same value or rank. The best pair hand you can get is A-A-K and the worst is 2-2-3.

Color – You have any three cards of the same suit but are not in sequence.

Run (Sequence) – Three consecutive cards that are not of the same suit. The best Sequence is A-K-Q and the lowest is 4-3-2.

Straight Run (Pure Sequence) – Three consecutive cards that are of the same suit. The best straight run is A-K-Q, the worst you can get is 4-3-2.