YouTube has become a great platform for artists of all kinds. If you are good at something then just showcase your talent on YouTube and let the world know about it. Many Indians are making the most of this easy to use platform to gain money and fame. It has become a full fledged career and source of income for many. 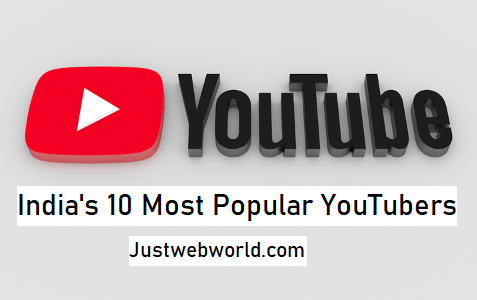 Here is a look at Top Indian YouTubers and their channel.

Amit Bhadana is one of the most popular Indian YouTuber. He has as many as 16 million subscribers. Amit is loved for his desi style. He created his YouTube channel, Amit Bhadana in Ocober 2012. Initially he had to struggle to fetch the audience’s attention.

He uploaded videos regularly but did not get the desired response until his video featuring Adele’s song surfaced online. This video was a game changer for Amit. It went viral giving him the much needed break. Most of his videos are on relationship and routine life. He presents such situations in a humorous manner.

Bhuvan Bam created his YouTube channel, BB ki vines in June 2015. He decided to dive into this profession after getting an overwhelming response for his videos on Facebook. He mostly posts comic videos on different situations. Many of his videos trend on YouTube owing to their well timed comedy. He also posts music videos.

He has more than 14 million subscribers. Bhuvan was awarded the WebTVAsia Award for the Most Popular Channel on YouTube in the year 2016.

While most top YouTubers post entertaining videos, Gaurav Chaudhary is known to post tech related videos. His YouTube channel, Technical Guruji has as many as 13.7 million subscribers. His videos have a whopping 1.3 billion views.

Gaurav is an engineer and has thorough knowledge about the technical stuff. The same can be judged by the kind of videos he creates. Gaurav posts brilliant tech videos that are loaded with information and easy to understand. He started this channel in October 2015 and there has been no looking back since then.

Ashish Chanchalani is known for his amusing videos. He posts videos on routine life. He picks general topics such as fights between siblings, bond between friends, nagging parents, etc and presents them in the most hilarious manner.

It is a treat to watch his videos. He has been active since July 2009. He uploads videos regularly. And He recently took home the World Bloggers Award for the Best Comedy Influencer 2019.

Sandeep Maheshwari is a well known Indian motivational speaker. He takes free life changing seminars to help distressed people overcome their stress and look at the positive side of their situation. He also runs a YouTube channel, Sandeep Maheshwari.

Clips from his seminars and other motivational videos featuring him are uploaded regularly on his channel. His videos are truly inspiring. He talks on various topics to help people deal with different kinds of situations.

Sandeep has more than 11 million subscribers. His videos have changed the lives of many. He is indeed doing a great job.

Rajesh Kumar created his channel FactTechz in July 2016. He posts knowledgeable videos on topics related to science. Several science-related topics have been covered on his channel. His videos have gained popularity owing to the simple way in which complex theories have been explained in them.

FactTechz has as many as 10.5 million subscribers. The channel has fetched 678 million views. The channel is particularly helpful for students. Many of the science topics they find difficult to understand in their classroom sessions can be understood here.

Nisha Madhulika has a YouTube channel by her own name. She has gained immense popularity owing to her food recipe videos. She uploads regular videos providing complete details about different Indian recipes.

The way she explains the cooking techniques is easy. She also provides certain cooking tips along with various recipes to make the process easier and the food tastier.

Nisha created her channel in August 2009 and has been uploading videos regularly. She has managed to gain as many as 7.5 million subscribers.

TsMadaan is one of the eldest YouTubers. He was born in 1958. Interestingly, he has made a place of his own among the young YouTubers. The genre of his videos is quite different from that of other popular YouTubers. He posts videos on heath, career, society and family. He also uploads videos on topics related to soul.

The channel has 7.6 million subscribers.

Vidya created her YouTube channel by the name, Vidya Vox in March 2014. She posts music videos on her channel. Her videos are refreshing and entertaining. She has managed to reach 6.1 million subscribers. Her subscribers await her videos eagerly. It is a treat to watch these videos. They are full of life. Vidya is doing a great job.

Shruti Arjun Anand is known for uploading informative and entertaining videos on her YouTube channel. She created her channel by the name Shruti Arjun Anand in January 2010. She has worked hard to make a place among the top Indian YouTubers. Many of her videos are related to beauty and lifestyle.

She gives an insight into these topics in the most pleasing manner and this is what keeps her audiences hooked. She has 4.9 million subscribers.

I have subscribed to most of these YouTubers. Have you? Which one among these is your favourite?

Top Most Indian YouTubers By Subscribers and Their channels.
Spread the love