Many leading observers claim that Tom Brady is the best quarterback of all time but his statistics suggest that he might just be the greatest player the NFL has ever seen. Since being picked up by New England Patriots in the 2000 draft, he’s gone on to claim seven Super Bowl victories and has been named as MVP in five of those matches.

Brady is the only player to have claimed MVP awards for two separate franchises and he’s set a number of overall records. The veteran is at the top of the tree in terms of Passing Yards, Touchdown Passes, Completions and Games Started. 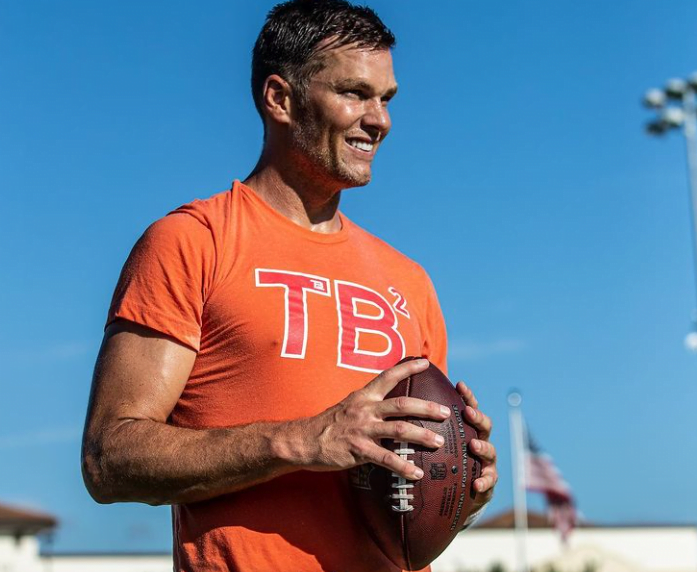 At 43 years of age, there’s no signs of him slowing down just yet, so with the NFL draft fast approaching, can anyone stop Tom Brady when the new NFL season arrives?

It was felt that, when Tom Brady made that unexpected switch from the Patriots to the Tampa Bay Buccaneers, his days of winning Super Bowls were over. At the age of 42, would he even be first choice starting quarterback at the Raymond James Stadium?

Not for the first time, Brady defied his critics as he led the Buccaneers to success at Super Bowl LV. Tampa bay will, therefore, go into the new campaign as reigning champions and they are highly rated in terms of a successful defense.

Virtually every online sportsbook has the Buccaneers as second favorites for the odds to win Super Bowl LVI with Kansas City Chiefs heading the markets.

Other teams in contention at the top of the sportsbooks’ lists include Baltimore Ravens, LA Rams, Green Bay Packers and the Buffalo Bills.

The Chiefs head those markets but does that mean that Kansas City will provide the biggest challenge to Tom Brady and his Tampa Bay side? The Chiefs made it all the way to the Super Bowl but were lacklustre as the Buccaneers secured a comfortable 31-9 victory.

Kansas City may have been mere bystanders at Super Bowl LV but their overall record last year suggests they can go deep once again. Andy Reid’s side finished with a regular season tally of 14-2 and were comfortable winners over the Bills in the AFC Championship match.

With some shrewd trades and drafts in the off season, the Chiefs are certainly the team to beat in the AFC and few would be surprised if they lined up against Tampa Bay once again.

How to Stop the Best in the Business

There’s no doubt that many coaches have had one thing on their mind whenever Tom Brady appears in their opponents’ line up. Just how do you stop the man?

Clearly it’s not easy but the most effective method, according to defensive coordinators, is to employ a pass rush that affects Brady’s timing when he’s looking to distribute the ball.

That would suggest that, when looking for key individuals in the battle to usurp Tom Brady, we’re looking at coaches as much as players. The defensive coordinator needs to implement the effective strategy while defensive backs must successfully carry out orders.

The Kansas City Chiefs could have an advantage once again due to their coordinator Steve Spagnuolo. While the Chiefs’ current coach was with the New York Giants, he masterminded one of Tom Brady’s most forgettable moments. In Super Bowl XLII, Brady was put to the turf five times as the Giants secured an unexpected 17-14 win.

A guide to the best pass rushers from the 2020 NFL season could also offer an insight as to which players and teams can unsettle Tom Brady moving forward.

At the very top of the tree were the San Francisco 49ers pairing of Nick Bosa and Arik Armstead. The duo produced the best stats ahead of Danielle Hunter and Yannick Ngakoue of the Minnesota Vikings.

Among those who also produced strong pass rushing numbers were Robert Quinn and Khalil Mack of the Chicago Bears and the LA Chargers pair of Joey Bosa and Melvin Ingram.

Of those teams represented, the 49ers are the highest ranked in terms of their chances of overall success. They may be producing the best pass rush stats but the Bears, the Chargers and the Vikings will clearly need to improve in other areas.

Similarly, higher ranked franchises including the Chiefs and the Green Bay Packers should be looking to address this key defensive issue.

Tom Brady’s former franchise the New England Patriots are given little chance of success now that their star man has left the roster. The key quarterback has left a huge hole but were New England really just a one-man team between 2000 and 2019?

The Patriots’ record from last season suggests that this might just be the case. Bill Belichick’s side finished with a return of 7-9 and failed to make it into the playoffs. Their opening record of 2-5 was the worst from seven games since Brady joined the franchise in 2000.

Those returns aren’t exactly encouraging for Patriots’ fans but it’s clear as to what is needed. An effective replacement for Tom Brady might just get New England back to winning ways in 2021.

No NFL franchise can rely solely on one man but Tom Brady’s influence on the Patriots and the Buccaneers is clear to see. Any team who is looking for Super Bowl glory in 2022 will need to stop Tampa’s key man first and foremost.