India is home to several species of wild animals. Various types of wild creatures inhabit different parts of the country. Here is a look at the top wild animals of India. 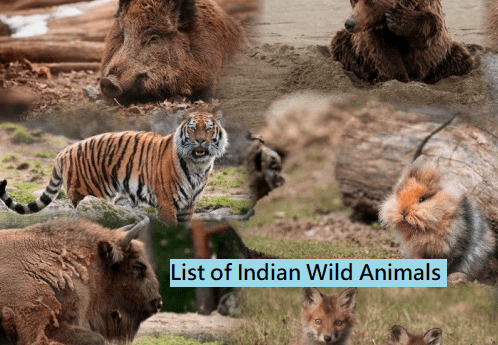 Bengal Tiger primarily inhabits India. The species also resides in the neighbouring countries such as China, Nepal, Bhutan as well as Myanmar. The royal tiger belongs to the Felidae family. It has a soft bright yellow coat with vivid black stripes. The wild creature has a huge, robust body. 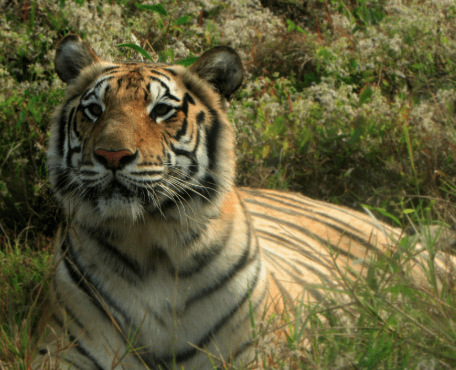 A fully-grown male Bengal Tiger weighs up to 420 pounds. Besides, it has the longest canine among carnivorous mammals. Bengal tiger is known to be a solitary animal. It marks large territory.

The life expectancy of Bengal tiger is around 14-16 years.

Indian Elephant belongs to the Elephantidae family. It is huge but not really a threat to the other animals around as it is herbivorous. It mostly lives on leaves, stems as well as grass. 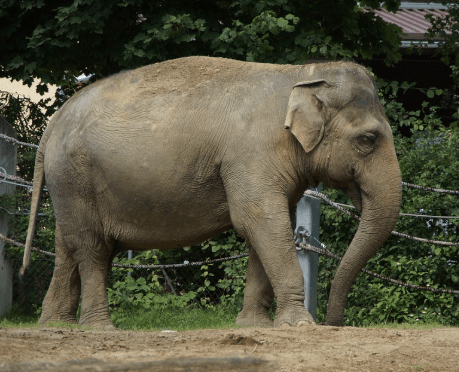 The life expectancy of Indian elephant is between 60 and 80 years. It is an endangered species. Elephant’s tusks are highly in demand. This poor creature is thus hunted for the same.

Asiatic lions live in the Gir Forest in the Indian state of Gujarat. They hunt down other huge animals such as rhinos, zebras, hippos as well as nilgai. They use their large canines to tear their flesh and quench their hunger. 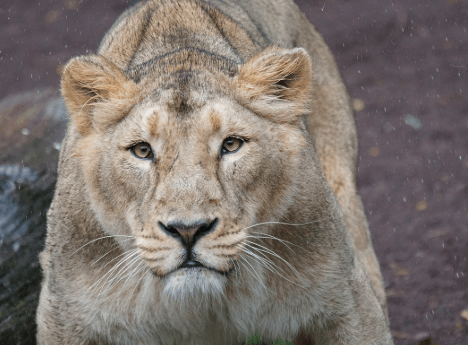 Asiatic lions split from their African counterparts around 100,000 years ago. They are smaller than the African lions. Their mane is also shorter.

The life expectancy of male Asiatic lion is 16 years. The female usually survives for 17-18 years. Sadly, only few hundred of them are alive.

Snow leopards live in the cold deserts of Asia. They have a soft, glossy fur all over their body. The fur around their stomach is around five inches thick. This keeps them warm in the icy cold weather. They are strong and powerful. They can prey on animals that are three times their body weight. 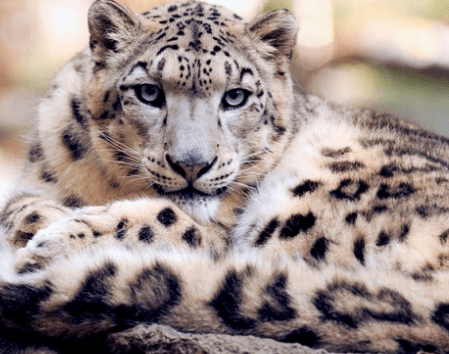 Snow leopards roam around in solitude. Their other name is  ghosts of the mountain as it is difficult to catch their sight. Interestingly, these animals cannot roar. They only growl and yowl.

The life expectancy of a snow leopard is around 18 years.

Indian leopard belongs to the Felidae family. It is among the five big cats that live in the Indian forests. The carnivore has a soft yellow coat with black spots all over. It has a huge skull and sharp clause. It hunts and eats different animals including nilgai, deer, peacock, monkeys as well as various other animals living in the wild. 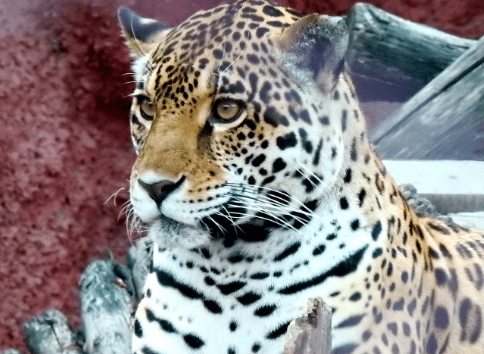 Indian leopard can climb the trees. It is also an excellent swimmer. This wild creature is quite dangerous as it can reach far and wide to catch its prey.

Indian Bison is seen in the Indian subcontinent mostly in the Western Ghats. It belongs to the Bovidae family. It is the tallest among the wild cattle species. Indian Bison or Gaur is herbivore. It survives on grass, leaves, stems and seeds. It is very strong and powerful. 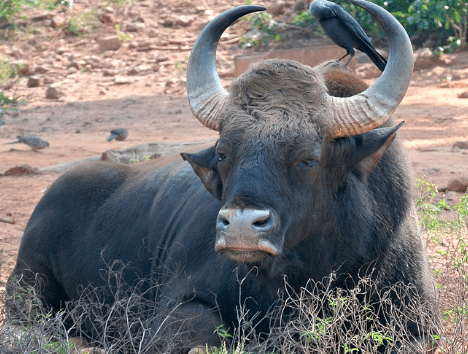 However, wild animals such as lions and leopards often hunt it down. It often moves around in herds. This is its way to protect itself and its young ones from wild animals.

The life expectancy of Indian Bison is up to 26 years. The species has been marked vulnerable.

Wild Water Buffalo is mainly seen in Assam.  It belongs to the Bovidae family. It is a herbivore. The animal usually eats grass, herbs and leaves. It has a huge and robust built. It can grow up to 9.8 feet tall. The average weight of a wild water buffalo is between 1500 and 2650 pounds. 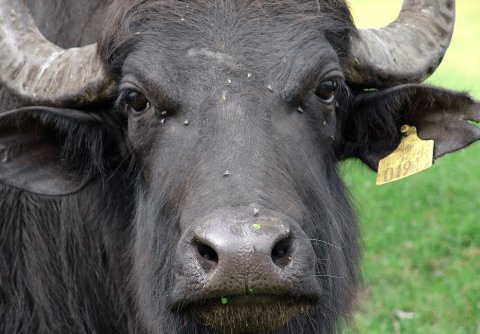 The wild cattle is black or white in colour. It has huge crescent shape horns. It uses its horns to fight other wild animals. The bulky wild creature lives in swarms and muddy water.

The life expectancy of water buffalo is up to 9 years in the wild. In captivity, it can live up to 25 years. It is an endangered species.

Sloth bear belongs to the bear family. The species is known for its thick claws and distinct teeth. Its primary source of food is ants and termites. These huge creatures roam around carrying their adorable cubs on their back. You may even see them hanging upside down on tree branches. 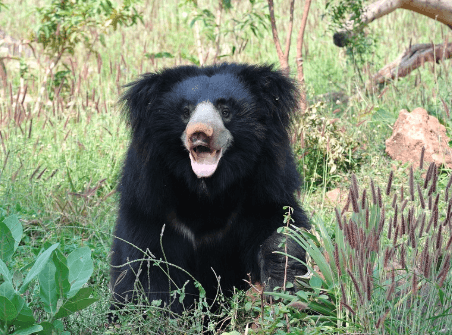 In addition to India, Sloth bear is also seen in Sri Lanka and Nepal. It is quite hostile and is thus dangerous. It mostly attacks people on head.

The life expectancy of sloth bear is around 40 years.

Indian Rhinoceros mostly inhabits the north eastern states of India. It belongs to the rhinocerotidae family. The bulky animal has a brownish-grey skin. Its skin has folds which make it look like an armour. It has a heavy and hard skull and a short tail. The ears of the Indian rhinoceros are flexible. Male rhinos have sharp incisors. 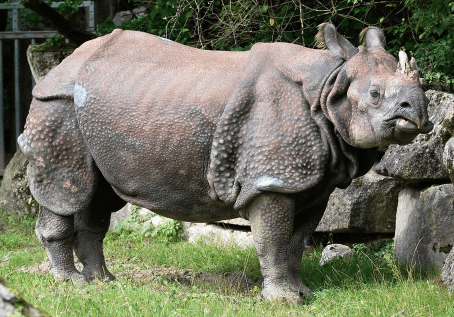 They use these to fight other males. Indian rhinos mainly feed on grass, aquatic plants, fruits and leaves. It can survive up to 40 years. The Pobitora Wildlife Sanctuary and Kaziranga National Park provide shelter to large number of these animals. These national parks also conserve various other endangered spices.

Nilgai also belongs to the Bovidae family. It lives in different parts of the Indian subcontinent. The appearance of female nilgai differs from that of male. Female nilgai has a yellow brown coat. 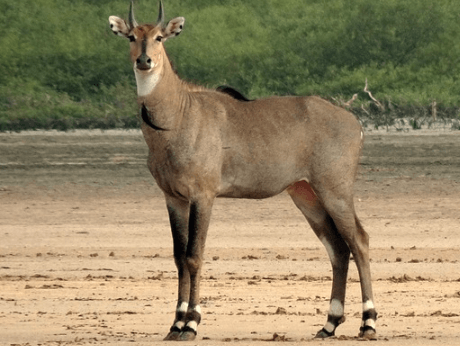 The coat of male nilgai acquires a blue grey colour as it begins to grow and mature. The animal grows up to 120-150 cm in height. It weighs anything between 120 and 240 kg.

Nilgai is a herbivore. It survives on grass, bushes, herbs, leaves as well as succulent plants. The life expectancy of nilgai is 21 years on an average.