Cricket World Cup is not seen merely as a game it is welcomed and celebrated like a festival. The enthusiasm with which cricket fans around the world await this event is simply unmatched. The entire atmosphere is filled with joy and excitement during the days the International Cricket Championship is held. 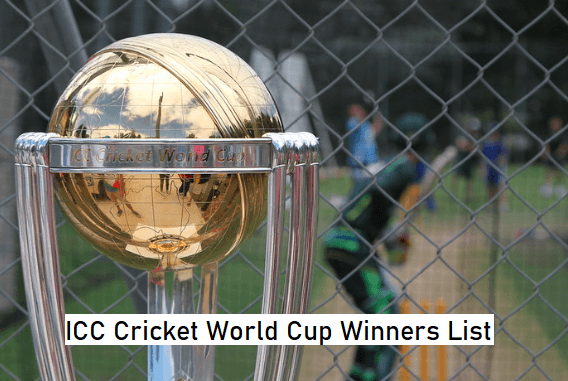 Cricket fans book stadium tickets weeks in advance to enjoy the game to the fullest. Big screens are installed in restaurants, market places and office complexes so that people can enjoy the game together. Watching the game in a group makes it all the more fun.

Nothing seems to be predictable when it comes to this tournament. Many a times it has been seen that a team performing average in the initial matches takes home the trophy while those that hit the field with a bang at the beginning of the championship see a slow down towards the end.

It is this nature of the tournament that makes it all the more interesting and exciting. You can never figure out what twist lies ahead.

ICC Cricket World Cup began in the year 1975. It is held every four years. A total of twelve World Cup tournaments have been played until now. If you are a true cricket fan then you are going to love the information shared here.

We bring to you a list of ICC Cricket World Cup Winners from the very first tournament held in 1975 to the latest one held in 2019. Here is a look.

England hosted the first Cricket World Cup. The one-day match series included 60 overs per side. West Indies cricket team emerged to be the strongest. It took home the ICC cricket World Cup trophy after beating Australia in the finals. The total score made by West Indies was 291 runs for the loss of 8 wickets. Australia could only manage to score 274 runs.

The event was again hosted by England. The series was yet again won by West Indies but this time by a huge margin. West Indies and England entered the finals and the former batted first. It gave a target of 286 runs. England could only reach 194 runs. West Indies won by a whopping 92 runs.

All the cricket teams reached England to participate in the tournament. This was the third time in a row that West Indies entered the finals. It was being speculated that it will win the championship this time too.

Giving a tough fight to the West Indies team was the Indian team that had reached the finals for the first time. India made a score of 183 runs which was easy to chase. But to everyone’s surprise West Indies could only make 140 runs. India proudly took home the trophy.

This was the first time that ICC Cricket World Cup was held outside England. This time the event was co-hosted by India and Pakistan. The number of overs was also reduced to 50 per side. Australia and England entered the finals. Australia gave a target of 253 runs. England could only reach a score of 246 runs.

The event was co-hosted by Australia and New Zealand. Pakistan and England entered the finals this time. While it was being speculated that England will win the tournament, it was Pakistan that took home the trophy. It won by 22 runs. This is the only time Pakistan has won the ICC World Cup trophy by far.

Cricket World Cup 1997 was held in India, Pakistan and Sri Lanka. Australia and Sri Lanka entered the finals. Australia gave a target of 241 runs. Sri Lanka played well and chased the score at the loss of just 3 wickets. It made a score of 245 runs and won by 7 wickets.

The event was primarily hosted by England. Australia and Pakistan entered the finals. Pakistan was the first to bat. It could only manage a score of 132 runs. Australia quickly chased the target at the loss of just 2 wickets. It won by 8 wickets.

In the year 2003, ICC World Cup was held in South Africa, Kenya and Zimbabwe. Australia and India entered the finals to take on each other. Australia gave a target of 359 runs. It made the score at the loss of just 2 wickets. India could not even reach 250 runs. Australia won the tournament by 125 runs.

The event was organized in West Indies. Australia and Sri Lanka entered the finals. Australia gave a target of 281 runs. Sri Lanka could only make 215 runs.

Australia created a history by winning the ICC Cricket World Cup for the third time in a row. They are since then known as the world champions in cricket.

The event was co-hosted by India, Bangladesh and Sri Lanka. India and Sri Lanka entered the finals. Sri Lanka gave a target of 274 runs. India chased it and won by 6 wickets. This was the second time the Indian Cricket team took home the ICC Cricket World Cup Trophy.

Australia and New Zealand gladly welcomed all the teams to play the tournament in 2015. The hosts entered the finals. New Zealand gave a target of 183 runs which Australia chased smoothly. It won by 7 wickets.

The championship was held in England and Wales. New Zealand and England entered the finals. It was an interesting match that resulted in a tie. The boundary count was taken into consideration to announce the winner. England won the trophy.

Do you enjoy watching cricket? Are you one of those who await the event eagerly and watch every match with zeal? Do let us know. We would love to hear from you!