These days, if there is any global trend that is sure to impact millions of people, there are always a few organizations that are the lead runners in bringing the change. Think about how whenever a new movement or trend starts, a familiar name is always associated with it.

Everything You Need To Know About Libra 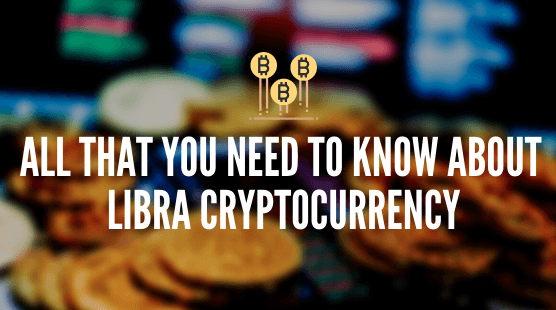 This time, that familiar name is Facebook. Yes, Facebook decided to be a part of the cryptocurrency trend by not only launching its own cryptocurrency to compete with the ones already existing in the market but bringing it big brands to contribute to the new digital currency’s success.

Which cryptocurrency are we talking about?

Facebook has announced Libra coins on the 18th of June, 2019 which will not only target Tier-I cities but also bring digital transactions to the lower Tier cities, even those which lack access to banks or other online wallets.

Now, Facebook was very clever in ensuring that it is not the sole regulator of Libra, especially since cryptocurrency is widely sought-after but at the same time, it is risky.

Libra is governed by the Libra Association, a Swiss non-profit organization based out of Geneva, Switzerland, which consists of 22 members including the Facebook subsidiary Calibra.

Other big names like PayPal, Mastercard and Visa were initially a part of this association as well. In the near future, the association hopes to accommodate 100 members, to make decision making and regulation easier.

Libra crypto currency hasn’t been released yet, but it’s rumoured that we will see it in the markets somewhere around the middle of 2020. It all started back in 2017 when Morgan Beller was working on the project and was later joined by David Marcus in 2018.

After many rumours that were circulating in global markets especially after Facebook created Calibra (a Facebook subsidiary), the official announcement was made about the new product.

How does Libra function?

The major fact stated about Libra is that it plans to be a form of a global currency, reinventing money and transforming the entire global economy. To do so, Facebook allows Libra to run on the basis of the Blockchain technology, common to other cryptocurrencies like Bitcoin.

However, there is a slight development in the decided infrastructure of Blockchain technology by Libra. Usually, Blockchain functions independently, where anyone can have a node where the system is decentralized and connected to millions of independent computers.

However, Libra has come with a new innovative idea where it allows the nodes of the cryptocurrency to be a part of the servers of the Libra Association only.

With the source code written in Rust, this way, the model isn’t fully decentralized but is also secure as no single Libra association member will ever have complete control. On both ends, with added benefits of open-source code, Libra looks like a win-win idea.

However, the authorities have released a hope to make Libra completely decentralized over the coming years if things work out for the cryptocurrency.

How will Libra ensure stability?

Whoever has followed the cryptocurrency market, they have seen the drastic rise and fall in the values of Bitcoin and other cryptocurrencies that followed. In this case, it becomes vital for Facebook, which has a market reputation to uphold, to launch a cryptocurrency that can ensure stability in valuation.

Infact, the idea to have Calibra as a digital wallet for payments across the social media platforms can ensure the diversification of any social and financial data.

Facebook and its subsidiary Calibra are both well aware of the importance of price structuring for any financial currency and hence have come up with a brilliant solution.

For Libra to be rightly priced, the Libra association will maintain a basket of various currencies and government securities (low risk) which will be responsible for determining the valuation of all Libra units in the market.

So, whenever anyone cashes out on a Libra coin, that cash also gets automatically added to this reserve kept by Libra association.

Considering how Facebook plans to keep Libra open to all users on its social media platforms, it had to ensure no discrepancies in the security of the coin, keeping the volatility in it as low as possible.

Well, Facebook hasn’t announced any plans about the distribution model of the currency. Then again, there have been rumours of a campaign to distribute a few units of Libra coins for free to anyone who has a Facebook account, which amounts to 2.4 billion users.

This is probably the only way it can get customers to be part of the system, especially when many people across the world are still apprehensive about crypto technology.

Moreover, the Calibra wallet will play a significant role in money transfer and payments to many vendors via an online mode.

In fact, Facebook will only make revenue with a small charge on these transactions, without hindering customers. The wallet would be an app available on smartphones and also a plug-in for WhatsApp and Facebook Messenger.

How does the future look for Libra?

Libra is yet to be launched as it awaits to be legally approved by authorities, especially in the US. Many banks and foreign bodies have highlighted that any such new cryptocurrency launches will be well scrutinized before being approved for activity.

But with an expected global market size of 57 million dollars by 2025, Facebook definitely wants to tap into better growth prospects as a part of the financial sector.

However, to have a low-risk and crystal-clear global currency as a medium of exchange has also become a necessity in the modern world, something that Libra can fulfill. With the possibilities of a ‘live support’ system and a refund process, Facebook might as well succeed in getting a fan base for Libra after launch.