Sacred Games is a thriller web series in India based on the novel of the same name written by Vikram Chandra in 2006. This series has been nominated to the Emmy Awards and is the first Netflix original series of India. 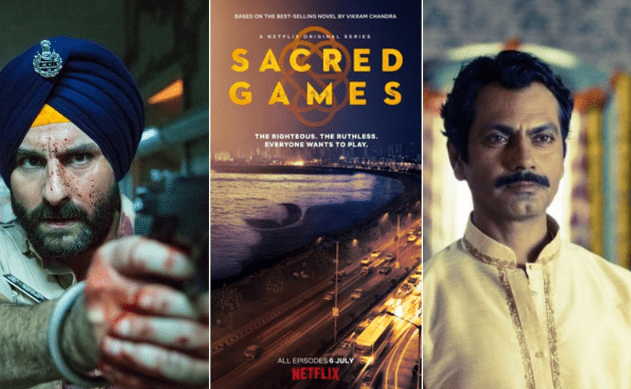 Anurag Kashyap produced this web series under the banner of Phantom Films and the director is Vikramaditya Motwane. The novel of the same name was adapted by Vasant Nath and Varun Grover. Erik Barmack, Kelly Luegenbiehl and Motwane were the producers.

1] The plot in short

Sartaj Singh, played by the supremely talented Bollywood actor, Saif Ali Khan, is a troubled police officer who gets a phone call from a gangster one fine day.

The name of the gangster is Ganesh Gaitonde and the role is played by another talented actor of Bollywood, Nawazuddin Siddiqui. He informs the officer to save the city within a span of 25 days. This web series portrays a series of events that follow after that call.

2] How the story of Sacred Games developed

The plot of Sacred Games started developing when Erik Barmack, Netflix’s Vice President got in touch with Motwane to create Indian content for the online platform in 2014.

They discussed about the adaptation of the novel written by Chandra in local language of India. Motwane immediately agreed to this idea. Once the script was done with, Motwane asked Kashyap about co-directing to which he agreed again.

For Motwane, the director of photography was Swapnil Sonawane and Aseem Bajaj and Sylvester Fonseca directed photography for Anurag Kashyap. The editor was Aarti Bajaj and the background score of this series was composed by Alokananda Dasgupta.

The initial 4 episodes of Sacred Games premiered on the 29th of June, 2018 and it comprised of 8 episodes. This was released on Netflix in 2018, July 5th across a total of 191 nations.

Sacred Games had subtitles in more than 20 languages and hence garnered positive reviews from the audiences and the critics. The writing of the script and the performance was beyond match.

6] Worthy reasons to catch up on Sacred Games right now

A phone call says Mumbai is in danger! Then the saving game that follows is dark, deep, mysterious and of course sacred. Sacred Games soon became a rage among audience and people who simply can’t wait any longer for the next season to release.

The 8 episodes are of 40 minutes each and you’ll be left awestruck after watching them. If you still didn’t watch them, here are few worthy reasons to binge-watch it right now.

1) The initial bolt from the blue

Nawazuddin Siddiqui plays the character of Ganesh Gaitonde, the gangster. You’ll find him saying, “Bhagwan ko mante ho?” which means “Do you believe in God?” and “Kabhi kabhi lagta hai apun hi bhagwaan hai” which means, “Sometimes I feel, I am the God”. Both these dialogues are going to give you a jolt!

You must never have heard such raw, bold, and dynamic dialogues in the very first episode of a web series. This series is often compared with Game of Thrones due to the engrossing nature of the first episode.

Once you watch the series, you’ll see that it doesn’t just revolve around the main characters played by Saif Ali Khan, Radhika Apte and Nawazuddin Siddiqui but it has a lot to say about the rest of the characters. Whether it is the Police Constable (Jitendra Joshi), Parulekar, Bunty or Kubra Sait, everyone will leave a positive mark in your mind.

There needs to be a special mention of Shalini Vatsa and Rajshree Deshpande who played the characters of Kanta Bai and Subhadra respectively. The roles are played so well that you’ll want to rewind and keep watching again.

3) Psychologies and plots with multi-dimension

This thriller web series begins with a threat call to the police officer, Sartaj Singh, where he is asked to save Mumbai.

However, this series is not just about saving this state from the hands of the gangster but it is has several other underlying plots. You’ll be able to find out some new characters and stories with different flavors and psychologies.

There’s no doubt when we say that an actor only becomes powerful when the director has done a great job. The directors of this movie have worked on Udaan, Gangs of Wasseypur, Satya, Lootera, Dev.D, Black Friday and several other masterpieces.

Hence, there’s no doubt that this show is definitely going to be a game changer. All of the aforementioned movies have, in their own way, changed the landscape of Bollywood cinema. This is the next time that the two gems, Vikramaditya Motwane and Anyrag Kashyap have come together in this web series.

5) Interesting names of the episodes

One among the major focal points of Sacred Games are the interesting and meaningful names of the episodes. The names have been taken from mythological stories and they’ve got a deep connection with the things that happen in every episode.

For example, the first episode is named Ashwathama after the Hindu legend. He was cursed to live for 3000 years and this made him impassable. The fourth episode is ‘Brahmahatya’ as Gaitonde is a Brahmin. Despite being a Brahmin, he gets involved in various activities that a Brahmin will never think of doing in his entire life.

Above all, Saif Ali Khan made a comeback with Sacred Games. While his career was going through a low for the last few years, this was a much-needed break for him. Over the years, his choice of movies has gotten better and henceforth we can look forward to better roles in the near future.