Home » Travel » The 15 Most Beautiful Beaches In Australia

When the University of Sydney took on a task of identifying the total number of beaches in Australia, it took them quite a long time.

Australia has near about 27,000 kilometres of coastline and hence you can figure out the number of beaches that surround this small continent. The population of Australia is concentrated in few pockets and hence it is no surprise that majority of the popular beaches are close to the coastal cities.

Best Beaches In Australia To Visit 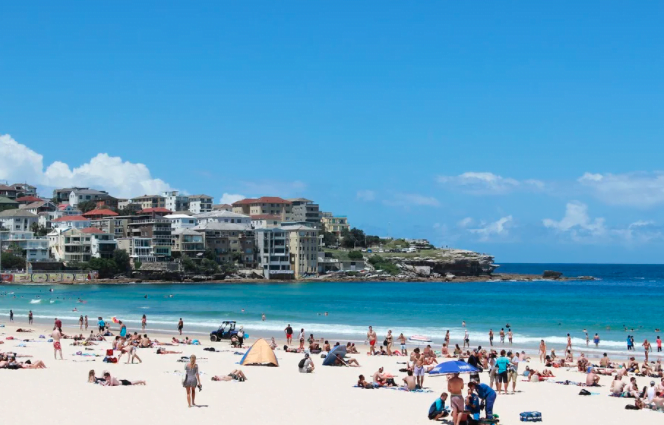 On the eastern seaboard, the focus is entirely on Sydney, Brisbane and Melbourne. Australians love their outdoor life and hence they tend to be successful in different types of sports. Here are the names and short descriptions of the 15 best beaches in Australia.

Bondi Beach is a very popular beach that is known all over the world. In fact, the sun-tanned lifeguards have been shown in several TV shows and films.

It takes you a short bus ride from the main heart of Sydney to get the splendid sight of this curvy beach, the swimmers, the sunbathers and the surfers to greet you. The water in this ocean is very swim-friendly.

This is an immensely beautiful piece of stretch of sand that has very few equivalents, even within Queensland. The waters of this ocean are too inviting though there are certain times of the year when the box jellyfish appear in this coast and they’re highly poisonous.

In order to protect the swimmers, there is a fine mesh that prevents the jellyfishes from reaching the swimmers. There are bottles of vinegar placed around the beach in case you’re stung by them.

The suburb in Sydney called Manly is well known for its famous Rugby Union team but they are outshone by the lovely beach that you find there.

People of Sydney have been swimming in this ocean for more than a century now and several surfing championships have been held here many a times. There are restaurants, some of the best bars and shops around this beach.

For many years at a stretch, this particular beach was considered to be the best in Australia. However, with the huge competition among Sydney beaches, it is tough to hold on to this honor for an indefinite period of time.

Whitehaven Beach is a stretch of 7kms of sand on the largest Whitsundays islands. It is a white sand beach and it is as pure as any other thing in the world.

Surfer’s Paradise is well known for its warm and lovely sand along with its clear blue waters. It is a resort 80kms down the coast of South Brisbane, whose popularity among the visitors have grown staggeringly over the years.

The high-rise skyline is very popular here while the cafes, shops and nightlife all help in attracting the best tourists. You can also do a picnic here with your family.

This bay and the small town share the same name on the Fleurieu Peninsula and this is 100kms towards the north of Adelaide. This Bay was famous for its ancient jetty but recently it has been replaced.

This beach lies under the impressive cliffs and this remains one of the wildest secrets to the wider world. There are no lifeguards on this idyllic beach.

This is possibly the largest sand island in the world as it is 166,000 hectares! Its tropical rainforest and lovely white and golden sands create an ultimate paradise for the beach lovers.

There are huge dunes, freshwater lakes and shipwrecks. The colors that you see here are much more than magnificent and the Great Barrier Reef lies to the north.

Noosa Main Beach lie 130kms north of Brisbane and in case you wish to learn surfing, this is the right place to do it. The waves here are gentle and there will be ample lifeguards and experienced surfers in order to make you feel safe while you learn surfing. Noose Main Beach is a rather impressive spot.

This beach lies in between Port Hedland and Broome in North West Australia and is much longer than what its name suggests. It is 220 kms long and that means 137 miles. This is a great place for the bird watchers who are keen on gazing at this wading species.

The Mooloolaba Beach lie on the Sunshine coast and it is north facing. The water of this beach is calm all over the year and hence is a possible attraction for boarders, swimmers and body surfers. It is a family favorite for its rock pools that are worth exploring. The town is split between the beaches and the river.

This beach derives its name from the cable that was laid in 1889 between Java and Broome. The high season here is May to October and since then it rarely gets overcrowded. When you see the sun setting on the Indian Ocean, it is a real treat to your eyes!

This bay is perched on the Freycinet Peninsula that lies on the east coast of Tasmania. The stunning scenery adds to the feeling of staying here, whether you’re staying for luxury or you’re camping. The pink mountains serve as a worthy shelter to this beach.

The Bell’s Beach is located 100 kms south of Melbourne and at the start of the Great Ocean Road that leads to Adelaide. This is also a great place for surfers and the oldest surfing content was held here, the Rip Curl Easter Pro.

Even more than the sand, there is an attraction towards the Turquoise Bay in Ningaloo Reef. This is a part of the Cape Range National park and it faces towards the Indian Ocean. The colors are amazing and it is best for snorkeling.

This lies at the southern end of Gold Coast, Burleigh Heads typifies the laid-back atmosphere for most of the Australia’s beaches. Surfers and swimmers just love its waters and the wildlife park nearby is famous for wildlife photography.