Once you listen to the best pop songs of all time, you’ll find them to be groundbreaking and chart-topping, so much so that you’ll want to sing to them at the top of your lungs.

Most Popular English Songs of All Time 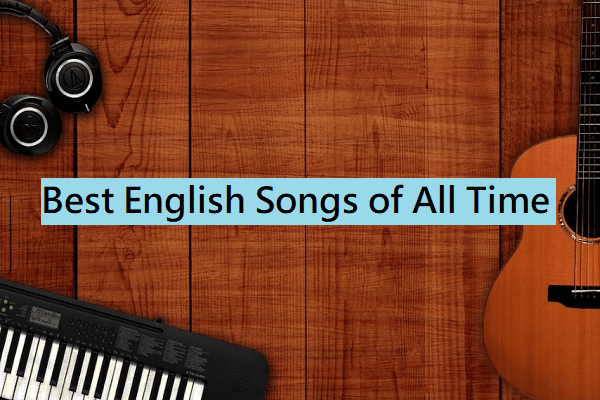 From the easily recognizable introduction note to the strange prelude of Vincent Price, you can never forget the epic and breakthrough mini music video called ‘Thriller. This album was instantly called a classic and it still remains popular since 1982.

This is definitely one of the best songs that have been ever made as it is totally captivating and innovative. Due credit goes to Freddie Mercury, the Queen. To put it in simple terms, this song has got every element that a song may ever require. This is the greatest in classical music.

Madonna is said to be the queen of pop and this song belonged to her 1984’s hit album of the same name. Thanks to this popular song, Madonna gained serious credit for her image as a music icon. It reached Billboard Hot 100’s most coveted song that people could listen to countless times.

Robert Plant’s lyrics has always followed a poetic storytelling flow and when this is combined with the exceptional musical composition of Jimmy Page, a superhit rock song called ‘Stairway to Heaven’ was born. This has become a legendary song created by the greatest rock musicians of all time.

This artist with the name of Prince was the one who always raged against copyright infringement rights throughout his successful career so that there could be no YouTube copies. Just after Prince’s death, the 1984 track again came up to the top 10 list reminding everyone of this hit number.

6] Whitney Houston’s I wanna Dance with Somebody

Whitney Houston is undoubtedly a club shaker and she is the person behind all those chartbusters. Her novice album “Whitney” topped the Billboard chart and made it her 4th ever song to do so. I wanna Dance with Somebody even won her a Grammy and a Music Award.

This was a superhit song of 1998 which launched several teenagers’ makeovers ‘Baby One More Time’. Britney Spears was a 16 year old young lady when she released this song but soon she shot to stardom with this number. This album had a record sale of 10 million copies.

This song has got a truly inspirational lyrics listening to which, it may release your notion of ingrained ideas of space and time, segregation of people and those heaven-bound vs hell-bound. In short, this has been a masterpiece of John Lennon.

In spite of JT and the status of the gang that it had in the heart and mind of girls, this track made in 2000 was the only one to take the top spot of Billboard charts. You’ll fall in love with this song once you listen to it.

Who could have lived without the Backstreet Boys? They came back with a bang with their second album and this lead single was released in 1997. This song was an instant hit and you can ponder on whether the above song was a bigger hit or this one.

11] Adele’s Rolling in the Deep

This English song got immense popularity due to the tune and Adele released it when she was only 21. Despite being just 21 years of age, her voice still carried the expertise of a much experienced woman. This song grabbed her 2 Grammy Awards.

This song debuted in 1981 and with its uplifting tune, it became a karaoke classic after it was featured in the finale of Sopranos series that was covered by Glee cast. This was one of the 100 most downloaded iTunes songs in 2008-2009, around three decades post its initial release.

There can be just one name that can be mentioned twice and it is none other than Michael Jackson. The head-tilting beat and finger-snapping beat of Billie Jean will make you rush to the dance floor.

This is the anthem for all single girls and this song made Beyhive converts from every last hold-out. None can resist the leotard of Queen Bey and her signature dance moves. This video is undoubtedly Beyonce’s best videos.

15] Christina Aguilera’s Genie in a Bottle

This song belonged to the Disney album of Christina Aguilera and the tune had a mystifying impact that provoked or insinuated something dirty. However, the preteens knew that this song was actually on self-empowerment.

This song will awaken the cheerleader in all of us as Gwen Stefani did a great job with the lyrics and the tune of this popular song. From the hand claps to the drum beat, you’ll love everuthing about it.

Mars gave the vocals of this track that was produced by Ronson during this 4th collaboration. It cleaned at the 2015 Grammys and won the Record of the Year.

18] Taylor Swift’s Shake it Off

If you have no idea of the T-Swift fandom, you won’t know what this album did during 2014. If you saw the awkward dance moves, you’ll be left grooving to the number.

Taking a hiatus from making music, Biebs rebounded with Purpose in 2015. This song ‘Sorry’ is the second solo from his album and the video focussed on a squad of dancers.

This is partly a dance floor anthem and partly a very powerful song. This song won MTV’s 2011 VMA for being the Video of the Year and grabbed 2 notifications to the Grammy.