The trend of standup comedy and the Indian stand up comedians have caught up with not only the youth but also people of all ages. YouTube has become one of the best platforms where people are able to demonstrate their talent. Most of the standup comedians will tell you that they owe their popularity to YouTube.

Best Stand Up Comedians From India 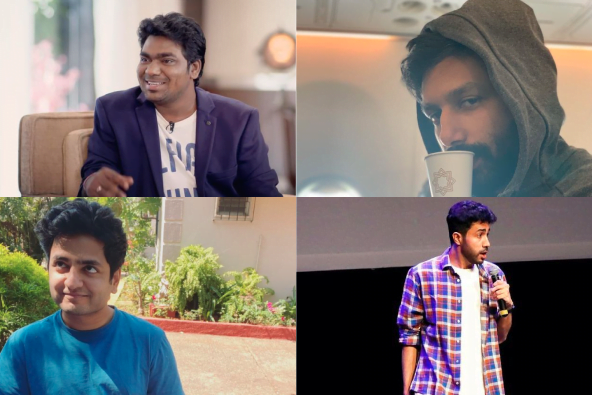 Thanks to YouTube that there is a whole new generation of standup comedians emerging in India. The past generations gave us some stellar comedians like Sunil Pal, Raju Srivastava and Bharti Singh, there is a new generation waiting to connect with us. So, let’s take a quick look at the names of the top 15 comedians in India.

Zakir Khan received instant fame when he won India’s Best Stand Up Comedian in the year 2012. However, most people got to know him post AIB Dirwas where he performed on ‘When I met a Delhi girl’.

He speaks in Hindi and specialises in anecdotal form of comedy which is the form of story-telling. He has the talent where he makes his audience connect with him through his jokes and stories.

Upamanyu’s USP is his straight face and that he brings in jokes from his own experience and delivers them with a poker face. He is a student of Chemical Engineering who delivers the best engineering jokes that will tickle your funny bones.

He also speaks on discrimination in India, breakups, respecting elders and childhood stories that turn out to be eye-openers.

He left his job at Oracle and you’ll see him joking about all his experiences in the engineering college. With more than 500K subscribers on YouTube, he is the best standup comedian in India.

Biswa and Kanan Gill met for the first time during the open mic in 2013 and he did ‘Pretentious Movie Reviews’ along with Biswa.

In case you heard how good was ‘The Living Room’ by Comedy Central, you should tank Kanan as he was the man behind the sketches. At the beginning of his career, he contributed greatly to a Comedy Central sketch program.

Kenny Sebastian is a full package and he is highly famous among ladies. A musician, comedian and filmmaker who traveled the world as a stand-up comedian and he also released the best comedy specials.

He began his career in 2014 where he not just wrote but also directed the season of ‘The Living Room’ that needs no introduction. He started his own films at an age of 15 years and by the age of 23, he also directed 12 short films and 2 feature films.

He is one more name among the most famous Indian stand up comedians. Abish Mathew is not just known for his sketches and lyrics but also for his funny enactments.

He has his personal talk show on YouTube known as ‘Son of Abish’ which is highly recommendable. He is revered for his work for All Indian Bakchod where he acted in the videos.

Aditi Mittal is one of the first female standup Indian comedians. She isn’t just a successful Indian comedian but she is also a writer in columns for Grazia Magazine, DA, FirstPost.com and Financial Times. Mittal not just ranked among the top 10 Indian comedians by the Times of India in the year 2012.

Neeti Palta started off her career in the year 2006 when she co-write the TV puppet series, Galli Galli Sim Sim which aired on DD National. In the year 2012, she won the RAW Comedy competition that was sponsored by the OZ-Fest and since then she began to post comedy videos on her YouTube channel where she gained maximum popularity.

Being an entrepreneur, engineer and teacher, he didn’t give up his aspirations for becoming a standup comedian as well. He joined the comedy industry not too long ago and he initially wanted to become a writer post attending ‘Hello Meet’ when he was motivated to do and also come across AIB’s First Draft Writer’s program. He has gained massive popularity through YouTube.

Abijit Ganguly is also a standup comedian who doesn’t deprive his fans of his comedy just because he couldn’t make it to the live shows. He makes sure he regularly posts videos in his YouTube channel. Ganguly has done more than 1000 shows in the last 4 years.

His jokes are based in regular activities, parties, racism, middle-class life and such things. These topics make him more relatable with people.

This is a man who doesn’t need an introduction because he is a veteran stand-up comedian who is also a voice artist. His genre of comedy lies in storytelling unlike others and he has had the ability to stick on to his viewers and audience. He has previously worked in one of the leading media agencies.

By profession, Gaurav Gupta is a dentist and he jumpstarted his career in the comedy industry in 2010 and eventually rose to new height in 2015 when he won the LOL Contest conducted by 94.3 Radio One. Though he is based in Delhi, he becomes a true Punjabi when he delivers jokes.

This is certainly a household name as long as standup comedy is concerned and he completed his B-Tech in 2012 and later on pursued comedy. He achieved fame in 2013 when his videos went viral on the social media messaging app, Whatsapp.

This is an engineer turned investment banker who is also a wedding photographer. He tells his stories from his real life experiences. For a long period of 4 years, he has been pursuing comedy before he got a chance in Comicstaan Season 2 of Amazon Originals. He was praised by all the judges of the competition that he won in 2018.

Initially he was a scientist but he had an ardent love for comedy that pulled him towards choosing this career of standup comedian. He made a name for himself in the year 2014 and his USP is his genuine style of storytelling.