Andhra Pradesh is located at the south-eastern coast of India and is said to be the 4th largest state of India. Hyderabad is the capital of this state and it is also the largest city. 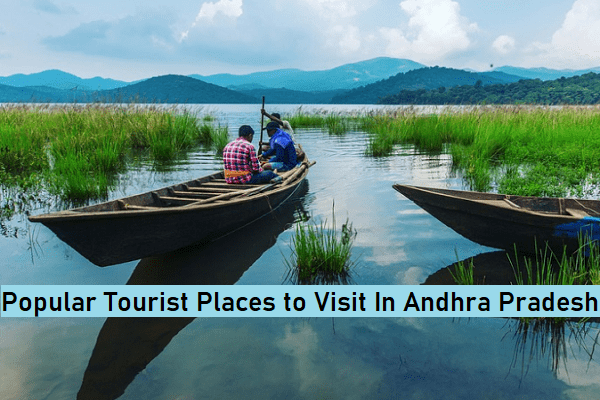 If you want to travel to this 4th largest state, here are the best 15 tourist spots to visit.

This beautiful place is known for caves, beaches and ports and RK Beach and Kailasgiri are the major attractions.

Visakhapatnam is the second largest city of Andhra Pradesh and is also one of the most important sea ports of India. The hilltops, beaches and wildlife sanctuaries are what make this place different from the other places.

As mentioned earlier, this is the common capital of AP and Telengana and is perched on the banks of Musi River.

Hyderabad was once ruled by the Mughals and Nizams and hence it is home to some of the best monuments of the world. The Golconda Fort and Char Minar are among the two most vital places you shouldn’t miss.

Tirupati is popular for Tirupati Balaji and Hinduism and Govindaraja Temple and Venkateswara Temple are the two main attractions.

This is one of the main religious and cultural pilgrimage spots of India. The major language spoken is Telugu and the temple is dedicated to Balaji, who is considered to be a form of Lord Vishnu.

The rivers of Nellore make this a famous tourist spot and Pulicat Lake and Ranganatha Temple are the two hot spots you shouldn’t miss.

The meaning of the word ‘Nellore’ is Paddy Place and hence it is one of the main agricultural cities of AP. This city was ruled by Cholas, Mauryas, Pallavas and Vijaynagar. The ancient temples make this place famous.

Vijayawada is famous for history, caves and nature. Undavalli Caves is one of the major attractions of this place. The third-largest city of Andhra Pradesh is Vijayawada and it is an agriculturally rich state.

Bezawada was the former name of the city and it was ruled by several ancient kingdoms. River Krishna runs through Vijayawada.

The Chittoor city lies at the banks of Ponnai River and is hence an agriculturally rich town of Andhra Pradesh. This town gets its economy from agricultural products like mango, sugarcane, grain and peanuts.

Chittoor has a unique climate that’s high in Eastern areas and low in western areas because of the change in altitude. The western area is a better place to spend time and relax.

Kurnool is the gateway to a region called Rayalseema and in the past, this was the state capital. The Srisailam dam, the Belum underground caves and the rock garden of Oravakallu are the main attractions of Kurnook.

If you’re a wildlife enthusiast, you’ll have a great time exploring the Rollapadu wildlife sanctuary which is the main habitat of Great Indian Bustard.

Among all the districts of AP, Anantapur is one of the largest districts and it is famous for agricultural products like maize, cotton, chillies etc. and diamond mining.

The town is located near the border state of Karnataka and has 6 rivers flowing through this place. The Thimmamma Marrimanu is the oldest banyan tree and it is also the largest trees in the world.

Kadapa is surrounded on its 3 sides by the Palakonda and Nallamala hills. Most people visit this city because of the temple of Sri Laxmi Venkateshwara.

This region is home to several religious places like Nandalur, Attirala, Gandi, Pushpagiri and Brahmagiri Mitta. The place is also filled with forts and covered by hills.

The other spots to visit are Hanuman Temple, Sathyabhama temple and Shiva temple.

The word Kadapa means ‘Gateway’ and it is famous for its special place which plays the role of a gateway to the pilgrimage destination, Tirumala Hills.

This town was a special part of the different ancient kingdoms and it exudes Dravidian style architecture as long as the stone carvings are concerned. Shree Venkateswara Wildlife Sanctuary is also located here.

This is undoubtedly a holy place in the district of Chittoor and Srikalahasti is revered for its wide array of ancient temples.

The popular Srikalahasti temple is one of the most popular Shiva temples that are located in South India. This temple also has a unique design of Shiva Linga inside it.

Golconda Fort is situated near Hyderabad and this is a ruined fort that was built in the 12th century. Despite being in ruins, this fort has still managed to maintain its beauty. The acoustic system is fantastic in this fort as you can hear echoes from one point of the fort to another point.

This splendid valley is perched amidst the hills of Anantagiri in Andhra Pradesh. If you love the beauty of hill stations, you’re going to love this place.

Araku Valley is inhabited by various tribes and it is popular for its coffee plantations. The waterfalls, streams and green surroundings make it a worthwhile destination.

This city is called the cultural capital of Andhra Pradesh and it is noteworthy place for its Vedic culture. The Chalukyas found this city in 11th century but this fact has been disputed by several archaeologists and historians.

They think that the town existed much before the Chalukyas ruled. River Godavari is the biggest attraction of this place.