Home » Electronics » A Brief History Of the Arduino Boards

These famous blue printed circuit boards are very popular among tinkerers and designers in the whole world. Let’s take a look at the history of the Arduino boards!

The Untold History of Arduino Boards 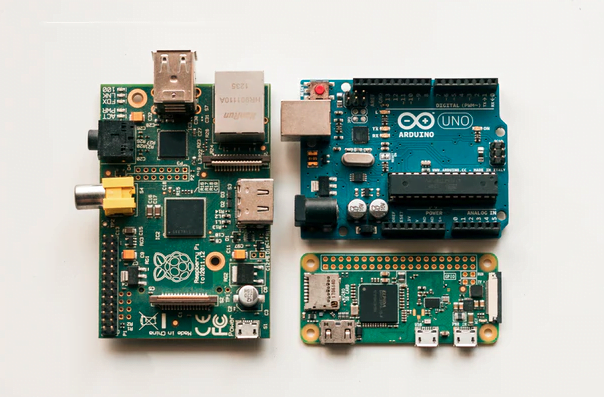 Before the famous blue PCBs with Atmega chips were created…

Not only the notable blue colour of PCB, but also the 8-bit AVR microcontroller – is one of the most important hallmarks of Arduino. In 1996, Atmel Corporation, specializing in the designing and production of integrated circuits, introduced the AT90S8515 microcontroller.

Its design was a combination of Harvard and RISC architectures. In 2001, an open source-licensed Processing IDE designed by Casey Rears and Benjamin Fry of Massachusetts Institute Of Technology is launched.

Two years later, Hernando Barragán and Massimo Banzi of Interaction Design Institute of Ivrea, create Processing-based platform called Wiring, which years later was modified to be compatible with the architecture of Atmega 8 microcontroller, based on the AT90S8515.

This project is named Arduino, in reference to the Arduino cafe where the creators of the project met, and also from the Arduin of Ivrea – the king of Italy living at the turn of the X and XI centuries A.D.

In 2008, the Arduino Duemilanove board with the automatic voltage selection mode function was implemented. The following year, the board was equipped with an Atmega 328 microcontroller with 32kB FLASH memory, which was a prelude to the Arduino Uno, released in 2010 which became the bestseller among the small development boards.

One of the official vendors of Arduino Boards is Botland Store which offers base modules as well as shields – dedicated hardware extensions for Arduino.

Arduino boards with AVR microcontrollers are still in production, but in 2012, Arduino Due was released for sale – it was the first Arduino board with a 32-bit ARM processor. Another proposal on the embedded market was the Arduino Yún board with support for Linino OS based on the Linux kernel.

During this time, over 700,000 original Arduinos are sold. In 2015, the Arduino group is split due to different opinions on the future of the company.

They are mostly related to the matter of provision of an official license to produce clone boards that are compatible with Arduino, which resulted in the founding of Genuino – a competing brand for Arduino.

Arduino 101 board with 32-bit Intel Curie ARC microcontroller is created. However, a year later, a reunion agreement between Arduino LLC and Arduino SRL is signed during the World Maker Faire on October 1st of 2016.

The Arduino MKR1000 board with ARM SAMD21 processor and built-in Wi-Fi module is launched on the market.