Home » Android » DU Speed Booster & Antivirus: A Must Have App for Smartphone Users

If you are smartphone user, you are definitely be tired and frustrated after using it for a month or less than a month because of its slow speed, isn’t it?

Well you have landed up at right place to know about such app that really does work and makes your android device faster as new. Yes! DU speed booster & Antivirus is really a popular and effective application to make your android phone fast and keep it safe from Viruses and Trojans. Read the complete review to know how DU Speed Booster works? 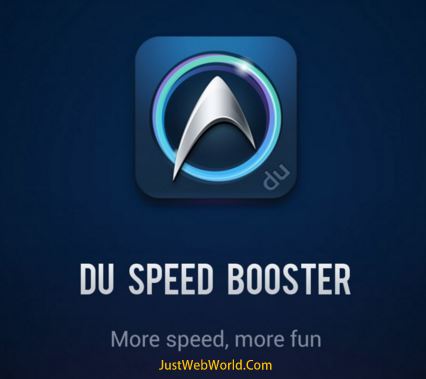 What is DU Speed Booster?

DU Speed Booster & Antivirus is must have an app because:

Let’s install the app, go through its interface and I’ll show you how its work from start to end with all the explanation of its features:

1. I installed the app from Google Play Store here for free of cost and after I started the app, this is the dashboard of DU Speed Booster & Antivirus. 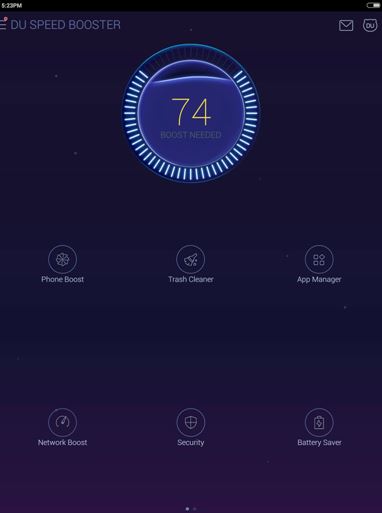 As you can see: DU Speed Booster is two window UI app, one is home dashboard and second is Game booster window. Now on dashboard right there in the upper middle of screen is counter wheel that counts the percentage of boost your android device need, taping on which cleans all the trash, unwanted or unnecessary files.

Below that wheel on the dashboard there is six icons which are as follows: 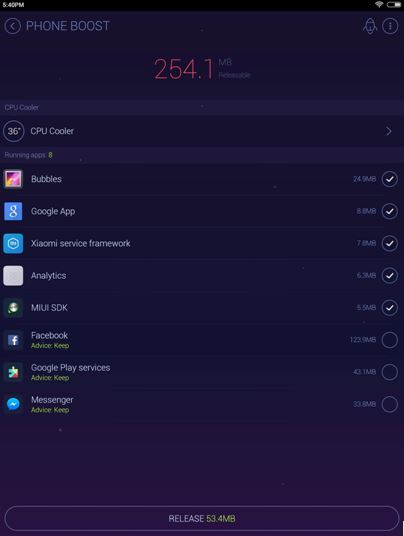 these are easy tap to optimize your phone icons, so when you tap phone boost, it calculates all the releasable phone memory which are running and can be release with one touch.

when you tap trash cleaner,it calculates all the trash found from cache, system trash, memory and unwanted files which you can clean from one touch as well, pretty smooth and easy to clean.

This is pretty cool, it has two icon one “Antivirus” to clean antivirus and Privacy Advisor which is good for those who are concerned about how their privacy being used, this icon shows you “what application do what” without your instant on screen permission, so If there is something you are suspicious about and don’t like to allow those permission to that app, go ahead and uninstall that app from their right away and stop using that application.

It’s not an option with function; it’s actually an ad by DU to its own app “DU battery saver” which is also a popular application.

2. That was all about dashboard, now at left upper in the three-line menu navigation we have options of: 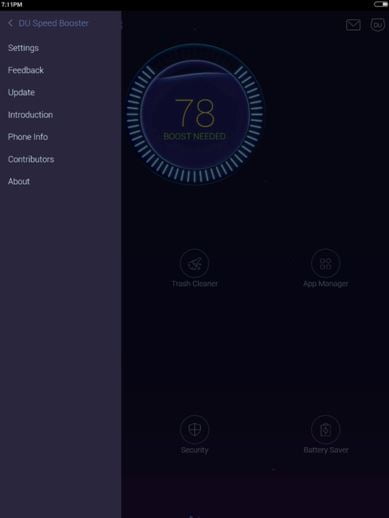 It is a popup window to send your feedback.

This option is to check and update your DU speed booster latest version.

It simply introduces you to the app.

It shows you your device’s real time information like storage memory and some basics.

It includes the name of the contributors to the app.

Its speed accelerator boots your android games and apps speed so that you can play games and application lot faster now. Use one touch “Optimization” or home screen widget for quick system speed diagnosis and acceleration.You can also manage background processes to kill tasks, freeze unwanted apps or disable auto-start apps that will clean up your smartphone memory to boost the overall speed of your smartphone.

Easy Manager with the Protection of Antivirus

Smoothly easy app installation and removal manager. Using DU Speed Booster & Antivirus you can manage the apps between your smartphone’s memory and SD card memory to free up memory and increase the storage space.

It’s antivirus scanner and permission manager is some advanced extras feature of it, using it you can quick scan your android phone’s apps and files and check the permissions requested by every apps to save your phone from Viruses and Trojans.

Talking about it rating, it will blow your mind and end up the every doubt you might have to directly install it which is why instead of telling you about its rating I first introduced you its features and how its work.

And this is a report about DU Speed Booster in the news with the title that it has received AV-test certification here.

In my recommendation (and many other massive users of this app) believe that this app can be the best option if your device are running slow and also it’s a must have application.

Comment below if you have any questions regarding this app or if you want to share some better alternative of DU Speed booster & Antivirus. 😀