If you’re one of the many people out there with a great app idea, and you’re wondering how to get it to market quickly and efficiently, you probably have a lot of questions.

How much money do I stand to make? Which platforms are the best to design for? Should I spend the time on developing and testing myself, or work with a 3rd party app developer?

There is no guaranteed recipe for success, but with a little research and the right tools, you can avoid falling into common app development traps by looking at factors that might increase your chances of success. 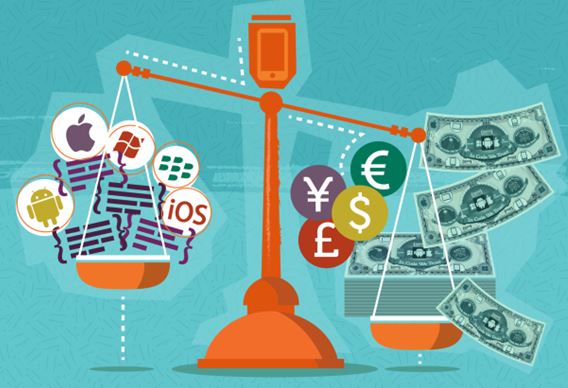 There are many factors that determine financial success potential with apps, so it pays to think and consider your options before diving in. The first step to successfully designing, developing, and launching an app is to know where the money is. The app world (and most of the technology sector) is driven by the quest for that bottom dollar — after all, very few people are designing and developing apps for free. If you want to monetize your app quickly by getting it into the app store or purchased by a larger company, the best thing to do is design it properly from the get-go. You’ll want to choose the right market — which usually means designing an app meant for business rather than consumer use (if you want to make some real money). A business-facing app will target enterprises and entice them with the promise of helping them with performance or productivity, which means that you’ll have the entire company as your client from the design phase through to wire-framing and product testing.

Next, you’ll need to decide on a platform: do you want your app to be specific to the iOS, to Android, to the Windows platform, or perhaps you want to design it across them all. It’s been widely reported in the tech media that iOS is still ahead of Android for revenues but there are suggestions that Android is closing the gap. Looking at overall revenues from the platform or the earnings of the very top developers, this seems to be the case and many apps do better under the Apple umbrella. However, revenue is more concentrated at the top on Android than iOS, so the chances of earning high payouts per app are still much higher for those who primarily target iOS. The Windows and Blackberry app market by contrast is quite low, and is really not relevant.

The next big step is to partner up with a third party app designer to help you get your app into the hands of businesses quickly and efficiently. You’ll want to find a company that is large enough to handle a big business client, but still boutique enough to keep you — the designer — in the loop every step of the way, through initial storyboards, to testing, to launch, and through to quality assurance. You might want to start your search with Clearbridge Mobile, a Toronto-based company that has made over 200 mobile applications that have been downloaded over 20 million times across all platforms.

A company with this kind of flexibility will help you through the whole development process. For iOS-related apps, you want a developer that will maneuver your app so it finds its way into the aggressive app store; for Android-related apps, you’ll want a company working with Kindle, Nabi, Fire Phone, and Chromecast. Clearbridge Mobile can also help get your app going on connected TV — from Apple TV to live streaming, and video-on-demand functionality, and they will be versed in wearable tech, such as Galaxy Gear. For beacon-based business, you’ll want a developer who works with Host Card Emulation-enabled NFC, and who is fully prepared for the upcoming, game-changing Internet of Things. If you want to find your way into the lucrative mobile app world, trust the Clearbridge Mobile custom best app design agency to help you get your project to market. Changing the game is easier than ever with the right help along the way.