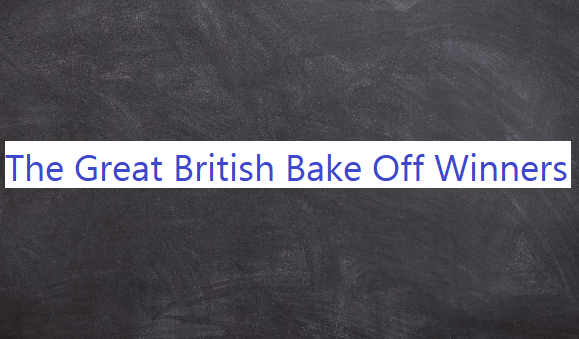 Where the winners and what are they doing now?

Kimber quit debt collector job to pursue a cooking passion. Edd published three books after quitting the job 1) Say It with Cake, 2) The Boy Who Bakes and 3) Patisserie Made Simple. The author won the first-ever Bake Off, way back in 2010.

After winning the first-ever season, Edd working on several cooking shows & gigs such as The Alan Titchmarsh Show in 2014, BBC Good Food, and on his blog. He runs a popular cooking podcast and the show called “Stir the Pot.” Edd is living in Highbury, north London with his boyfriend.

The season two of “All the Great British Bake Off” started to get attention from the viewers across the country. Joanne is one of the popular contestants on the show,   and she rose in the ranks. The interest level of the audience increased when the finale had all-female contestants.

Wheatley surprised everyone by winning the series two of a popular cooking show. Jo passion for cooking grew, she published two cooking books 1) A Passion for Baking and 2) Home Baking.

Later on, she cooked & baked on “The Alan Titchmarsh Show,” and Jo worked for other publications like The Sun and Sainsbury’s Magazine. Wheatley married long-time boyfriend Richard and blessed with three sons.

Whaite earned the degree in patisserie from Patisserie at Le Cordon Bleu in London.

He runs a cooking school in hometown, Lancashire. The winner of series three announced engagement on 21 July 2017.

Meanwhile, John published four recipe based cooking books in London. Perfect Plates in 5 Ingredients and Comfort: Food to Soothe the Soul books impressed many critics. The series three star co-host The Chopping Block on ITV. The winner appears on television frequently shows like This Morning and yes, The Alan Titchmarsh Show, and Lorraine.

Quinn work full-time in the baking field after winning the season four title of Great British Bake. The winner of S4 earned the trust of many high profile private clients, and the clients include Clare Balding, Jools Holland, and the Wimbledon Tennis Club. She earned the opportunity to publish a cooking book, Quintessential Baking. Frances baked the cake for The Shard’s first anniversary.

Meanwhile, she appeared in Vogue magazine. The 2014 runner-up Richard Burr teamed up with Frances for an episode of Pointless Celebrities. Quinn does not miss the opportunity to attend or participate in cookery demonstrations. Many food festivals held in the UK invites the winner to demonstrate her skills in front of the audience.

Nancy did not surprise the British audience when she won the title of Great British Bake 2014. The audience mesmerized by Birtwhistle performances in the show and the people supported her till the end of the show. Nancy is a senior woman with extraordinary baking skills that she perfect over the years.

The winner the grandmother-of-eight inspired millions of people in the country, and the show hit all-time high ratings. Currently, Nancy spends time with family and writes for “The Daily Telegraph” and personal blog.

Nadiya declared the winner of Bake Off series six on 7 October 2015. The winner of series six is the most successful Bake Off reality series winner in the history. Nadiya went on becoming a successful cook & baker in the country by appearing on shows, attending food festivals, featured in books, and more.

Hussain hosted three BCC shows, and the journey started with The Chronicles of Nadiya and then moved on to Nadiya’s British Food Adventure, and the last one Nadiya’s Family Favourites. The winner of S6 traveled different parts of the country to explore foods and food culture. The last BBC show concept based on home-cooked food and wholesome cooking.

The winner inspired millions of people around and it has earned her an opportunity to appear on “The One Show” regularly. Outside of cooking, she is a columnist for “The Times Magazine.”

The “Bake Me a Story”recognized by the Children’s Book of the Year prize at the 2017 British Book Awards and the judging panel shortlisted the book. The royal family asked the Nadiya to bake the cake for the Queen’s 90th birthday cake.

The PE teacher quit the job after winning the Bake Off series seven in 2016. Brown decided to become a full-time baker, and she is pursuing her passion. The winner of S7 published “Comfort: Delicious Bakes and Family Treats” book in the UK.

The Sunday Times offered the S7 winner to work as a columnist. She appeared on Dancing on Ice with Matt Evers and Loose Women show. Candice appears on food shows, and television shows regularly. Brown was focusing on baking career and improvising the food.

Sophie declared the winner of Bake Off title in 2017. The former army officer won the title, but it was not a surprise to the audience because Bake Off judge Prue Leith announced the results in the Tweet. Many people have criticized the announcement by Prue Leith, and the results were out in the tweet before the final episode aired on the channel.

The congratulations tweet played a role in Faldo staying out of the limelight. Faldo is trying her luck by working as a track cyclist, rower, and training to become a stuntwoman. Sophie is working appearing on cooking, and baking shows regularly.

Mandal is a research scientist by profession, but he found passion in baking several years ago. He is an intelligent man working for a major company. The baker won the “Star Bake” of the week twice in the show and he carefully intricate bakes. Mandal left the by becoming the S9 winner, and it surprised friends, family, and people around him. No one expected a research scientist to beat other passionate bakers in the country.

Rahul did not reveal if he wants to switch from scientist to baking & cooking as a career. For an Indian, It might not be easy for a young man to switch careers. Mandal originally from Kolkata in India and he earned a Ph.D. scholarship that allowed him to pursue higher education. The 30-year-old lives in Rotherham, South Yorkshire.

Our team will update the list once we have a winner of season ten of “All the Great British Bake Off winners.”