If you’re someone who prefers historical drama, you’d love Chanakya, a 47-part epic directed and written by Dr. Chandraprakash Dwivedi. This historical drama was telecast originally on DD National from September 8th, 1991 to August 9th, 1992.

This TV series was produced by Prakash Dwivedi and this series is a fiction that depicts the life of Chanakya, the 4th century BCE Indian economist, political theorist and strategist. He was also known as Vishnugupta and the story is based on all events that occurred between 340 BCE and 321 BCE. 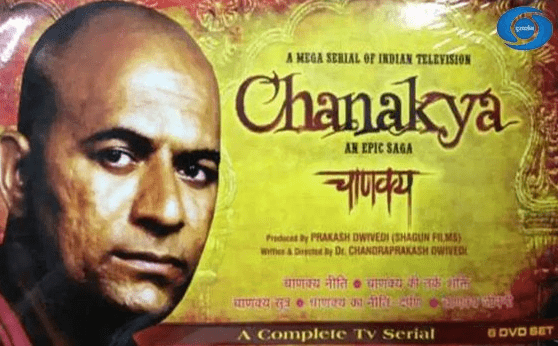 The storyline ranged from Chanakya’s boyhood and ended till the coronation of Chandragupta Maurya. The main role of Chanakya was played by Chandraprakash Dwivedi.

This entire TV series is segregated into 3 different acts which are as follows.

Chandraprakash Dwivedi has smartly portrayed the politics which was present among the officials and kings of that time. He has also extensively covered the early Indian people and their ordinary way of life.

Chanakya has always been open to political controversy and still it has been shownin several countries all over the world. This series won around 5 Uptron awards. Casting, authenticity and grandeur are the main reasons behind its popularity.

2] Development of the script

Dwivedi spent a time span of 9 years while researching information about Chanakya as he finished reading more than 180 books on the same subject including Arthashastra.

He mentioned that the present didn’t interest him and that’s why he wished to dig into the past and relate it with the present. After a lot of research and development, he came to the conclusion that politics is the crux of all sciences, as rightly said by Chanakya.

Initially, the idea of Chanakya started off as a film but later on Dwivedi cancelled it and transformed it into a TV series as it wasn’t possible to abide by the telecast guidelines.

He just wished to present a fictional work that is entirely based on historical evidence, much unlike the epic serials, Mahabharat and Ramayan. He was not at all eager to create any kind of drama regarding the story in order to attract the sentiments and emotions of the viewers.

When Dwivedi started off, he was just involved as the writer as his brother, Prakash Dwivedi played the role of the producer. Post several difference of opinion, Dwivedi decided to direct it himself.

The original director, Rajiv Singh had even gone to the extent of filing a lawsuit against him. It was on April 1986 that Dwivedi submitted the final script to Doordarshan. He obtained the approval 2 years later in 1988. By the end of 1988, December, he received the final approval.

3] The Filming of Chanakya

The pilot was shot and the expense incurred was INR 1.8 million. Initially, the channel, Doordarshan scheduled just 26 episodes for this series and they resolved to extend the episodes if the quality of the show was up to the mark.

Later on in 1992, another 21 episodes were granted against 26 that were demanded. The initial 17 episodes were shot over a period of 9 months at an approximate cost of 900,000 INR per episode. There was an involvement of more than 300 actors.

Now coming to the production team, there were some of the best experienced and skilful technicians like costume designer Salim Arif and art director, Nitish Roy who were involved previously in Bharat Ek Khoj of Shyam Benegal. Nitish Roy was the art director for the initial 25 episodes while later on Nitin Chandrakant Desai took over after episode 26.

The director and the entire production team took into account every single detail as long as weaponry and costumes were concerned. Even a single piece of armor that was worn on screen by Chandragupta was designed for 8000Rs.

The costumes, on the other hand, were based on Alkazi Raushan’s books and books by N.P Joshi and Dr. Moti Chandra.

5] How Chanakya was received by the audience

This historical TV series garnered enough praise and appreciation due to its authenticity, especially in the artistic devices and costumes. In fact, Sevanti Ninan, media and journalist critic, said that Chanakya will always stand out in our memory as the best period drama only for its transparency.

This series is said to be successful commercially by Doordarshan as it generated advertising revenues of 180 million. When they were thinking of opening another channel called DD Metro, they took into consideration the Chanakya experience as it was only through quality programmes that advertising and promotions could be attracted.

Henceforth, it can’t be denied that Chanakya brought in lasting as well as instant recognition not just to the main protagonist but also to the director. Dr. Chandraprakhash Dwivedi, after gaining huge success with Chanakya was called Dr. Chandraprakhash ‘Chanakya’ Dwivedi.

Chanakya was premiered on the main channel of Doordarshan, DD National in 1991, September. Soon the BBC picked it up and retelecast it in the UK on BBC2. At the same time, Amrita TV runs a dubbed Malayalam version that was given the name Chanakya Tantram.

The same series was later on broadcast in Canada, USA, Sri Lanka, Indonesia and Nepal. Later on since 1993, the total series was made available on home video. Now that the entire country is confined to their homes due to lockdown, they can once again binge watch Chanakya in DD National at 10pm.