Jun Sung Ahn is a Korean-American musician, who has risen to fame from YouTube platform after producing several videos. The member of BGA trained in classical violin, and he performed violin and dance cover performance of 2012 popular song Gangnam Style on his YouTube channel. He also produced and uploaded several videos on K-pop and pop music covers, which gained him a lot of popularity. 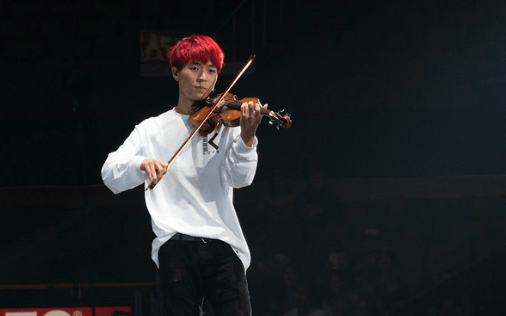 Ahn is a YouTube star because he found the fame from YouTube channel. He seized the opportunities that came his way over the years.

Jun is a Korean, who was born in South Korea to Korean parents, but the family moved to America at the age of 6-years-old. Sung is from Korea, but he is more American than Korean, and he joined West Windsor, New Jersey School in the third grade of elementary school. By fifth grade, he found passion in music, and he selected violin as a companion for coming years.

The YouTube Korean sensation started to practice classical violin for many years to come, and he did not miss a day learning something new about it. The Korean-American violinist started to participate in local competitions to prove that he has worked hard. He earned the right to call himself the expert at playing the instrument.

The boy born to a humble middle-class family and Ahn always admired his older sister for being humble, caring and silly. Jun older sister inspired him a lot during his childhood, and he always wanted to become like her.

During the middle school life, he admired the cooking skills of his mother, and he uses to watch cooking shows after school. At some point in middle school, he dreamed of becoming a chef, so he can cook delicious food that everyone can enjoy.

However, Jun career plans have changed later on, and he started to take his music career very seriously. During 2010, YouTube was reaching into greater heights with VEVO channels, and it also allowed the creators to get recognition on the platform. Sung learned about the platform, but he never produced any content in the initial days.

In college, he majored in radio/TV/film, and he did not pursue violin anymore. By 2010, he did not continue studied the violin and later on joined Northwestern University’s orchestra. During the time in an orchestra, he participated in Asian-concentrated dance crew. Majoring in radio/TV/film did not stop him from learning other instruments such as Piano, Guitar, and Violin.

By 2012, many content creators started to appear on YouTube platforms such as PewDiePie, VEVO channels, movies, and more. Jun saw the potential of the growing platform, and his musical skill can make a difference in the community.

In 2012, one song took over the world with 2 billion views on the platform, and it was recorded as the fastest video to reach one billion views in a few weeks. Gangnam Style video starred Korean singer PSY, and it inspired the Korean-American talented boy to remark.

Jun friends started to share the song all over platforms, and he realized that this is time to shine. Korean music was on the rise in 2012, and it increased the scope of K-pop in the country. Ahn timing was perfect to debut on YouTube by creating unique content, but he used the sensational song to make an appearance.

Switch it up! What did you guys think of this style 😛 Go watch the video if you haven’t yet! https://t.co/KPM9YnYqtI #JUN #LIMBO #Switch pic.twitter.com/f1YFnIRHcT

He was going back to 2011, where he started to publish violin covers of pop songs on YouTube. Jun used Korean ethnicity by adding “Curry” in the middle of the name, and In sixteen months, he had over 17 million views with 130,000 subscribers on the platform. He recorded & published covers of popular artist, and he selected popular songs only.

Sung collaborated with artists like Arden Cho and Sungha Jung for further development of his career.

Psy’s “Gangnam Style” took over the world with the song. Sung did not miss the opportunity to record the cover and uploaded it on YouTube. The song reached over 2.4 million views in a few weeks, and he won an award by PSY, which he held in South Korea.

On September 13, 2013, Ahn was an intern at MNET America. MNET is a leading Asian entertainment cable network, and he is working as an intern, so he can learn new ways to produce professional level unique content.

In 2014, KCON LA’s convention offered him to become the special guest, and he performed at Los Angeles Memorial Sports Arena. By the end of the year, he reached 500,000 subscribers by adding an additional 7 million views on new & old videos. The most popular song a cover of “Let It Go” helped him gain reached 4 million views and it has more than 8 million views to this date.

In 2015, he earned an opportunity to open the act at the Staples Center at KCON, Los Angles. The acts included Shinhwa, Block B, Red Velvet, and AOA. In the same year, he opened another KCON, New York for VIXX, Teen Top and Girls’ Generation and AOA.

In 2016, BGA members, musician David Choi, YouTube star Ryan Higa, actor Justin Chon, and filmmaker Philip Wang collaborated to work on a K-pop parody. The title is “Dong Saya Dae,” and it had millions of views on the first day. The video uploaded on NigaHiga channel, which had 15 million subscribers on YouTube. The parody music video has 15 million views to this date.

June 2016 at KCON NY, Ahn performed K-op covers as an opening act on Prudential Center stage. It included covers like Eric Nam, Mamamoo, Day6, Ailee, and BTS. The audience enjoyed the cover of BTS’ “Save Me,” and BTS praised him on a Twitter post.

In the same year, he participated in KCON LA’s pre-show held at Staples Center. Major stars and bands appeared at the center for a meet and greeted, and DEAN, I.O.I, GFriend, Amber, Turbo, Block B, and SHINee were part of it.

Harry Potter franchise approached him to perform with Baiyu Li, Lily, and Albert Chang. Later on, New York Public Radio featured it on the platform. KCON Mexico festival has the attendance of 33,000.

Jun was the guest participant, and it helped him gained more popularity. Wong Fu Productions featured Aha in a song titled “My K-Pop Boyfriend,” and it did well on various platforms.

He appeared in “Who’s it gonna be” song, which is a BGA YouTube K-pop parody. The video hit six million views within a week.

On August 3, 2018, Jun finally released his MV “Hold it Down” solo debut. In five months, it reached over 500,000 views on his first channel JuNCurryAhn.