Home » Wildlife » Top 15 Most Beautiful Animals In the World

There’s no doubt about the fact that the natural beauty of animals that surround us are extremely inspirational. The German Artist, Albrecht Durer, was the first man to ever discover the underlying charm of animals. It’s not for nothing that animal photography is considered as the most popular genres.

15 of the Most Beautiful Animals 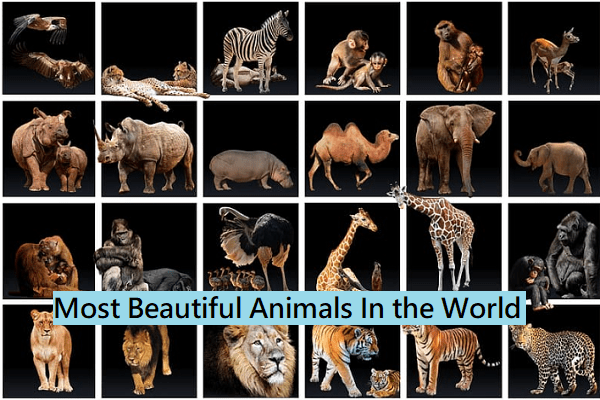 Nature is resplendent with some of the most amazing animals that play their individual role in revealing the wonders of evolution. Here we’re going to discuss the top 15 most beautiful animals in the world.

The Madagascan sunset moth with a scientific name of Chrysiridia rhipheus is a very colorful lepidopteron that is famous among collectors.

The wingspan of sunset moths range up to 11cm and they are usually mistaken for butterflies as they exhibit beautiful colors. Its habit of resting by keeping its wings vertical also resembles a butterfly.

Belonging to the class of Mammalia, tiger’s scientific name is Panthera Tigris and it inhabits all over south-east Asia. Among the big cats, the tiger is the most attractive, eye-catching and also the largest.

It can grow up to 3.3 metres (lengthwise) and can weigh up to 300kg. They have a lifespan of 26 years. Bengal tigers are the most common the Siberian tigers are the largest.

This species is found in New Guinea and all the adjoining islands. It belongs to the genus ‘Leiopython’ and till date, there have been identified just 6 species. Did you ever run across one such python? If you did, you needn’t fear as they are non-venomous.

This animal belongs to the Amphibia class and its scientific name is Dendrobatiae. Such frogs are found in tropical rainforests that include Costa Rica, Bolivia, Ecuador, Colombia and several other places.

The secretions of the dart frog are being studied for medical trials and it can be used for suppressing appetite, muscle relaxants and heart stimulants. There are nearly 175 closely knitted species of poison dart frog that vary in coloration and size. The most colorful ones are those within the dendrobates genus.

This belongs to the Aves class and its scientific name is Eupetomena macroura and its habitat is Brazil. This hummingbird lives in eastern and central South America. It loves sparse woodlands, scarcely open areas, gardens and coastal regions.

The swallow-tailed hummingbird always stays away from dense rain forests. The long tail of the bird comprises its length of 16cm and it can flap its wings at around 20 beats per second.

The Candy Crab grows 2cm long and it has the power of camouflaging its bright colors to match corals which are its main habitat. This crab can turn yellow, white and pink according to its need.

The scientific name of Caracal is Caracal Caracal and it belongs to the class Mammalia. Its habitat is the Middle East, Africa, India and Central Asia. This animal has derived its name from ‘kara kulak’ which means ‘black ear’.

The Caracal has long, flexible and tufted ears that let it hear even the smallest of sounds. Thanks to its hind legs that let it leap high up in the air to catch birds.

The scientific name of this animal is Procolobus kirkii and it belongs to the mammalia class. As the name suggests, the Zanzibar red colobus inhabits the forests of Zanzibar, an island that lies at the coast of Tanzania.

This is an almost endangered species as there are just 3000 left in the world. Due to their unusual smell, they are often calls ‘poison monkey’.

Among its species, the Indian Bullfrog is definitely one of the most magnificent ones. This mammal is found in Bangladesh, India, Nepal, Pakistan, Afghanistan, Myanmar and Sri Lanka.

They prefer wetland areas. However, unlike its colorful contemporaries like the Poison dart frog which also exhibit awesome colors, this is non-venomous.

The scientific name of this animal is Ceyx erithaca and it belongs to Aves class. It resides in Southeast Asia and the Indian subcontinent. This is around 13 cm in length and it lives close to rivers and streams and wooded areas. It eats snails, insects, frogs and small lizards.

The scientific name of Mandarinfish is S. Splendidus and it is one among the two vertebrae species that’s known for its blue color that comes because of its cellular pigment. The Mandarinfish live off the Australian coast, near the Great Barrier Reef.

The scientific name of this animal is Vulpes Zerda and it belongs to the Mammalia class. The fennec fox lives in the Sahara and North Africa.

The ears of this animal can grow up till 15cm long and they radiate heat and allow locating a potential prey. This is a nocturnal animal that hunts birds, mammals and insects at night.

Brazil has always been home to some of the most amazing birds of the world due to its greenery and jungles (which are now considered endangered). This Green Headed Tanager traverses the canopies and visits enthusiasts where they happily take bird seeds from the feeders.

This animal got its name from the Queen Victoria herself and it is one more fanciful bird that was found in New Guinea. They make their habitats some 3000 feet above the level of sea in the mountains. Hence, they can take flights to the ocean to search for food.

The formal name for the Jewel Beetle is Buprestidae and they usually reside in Thailand and India. Despite living in far-off locations, animal enthusiasts have still recognized this beauty of nature.

The royal families of England have been so amazed by this Jewel Beetle that they ordered jewelry including necklaces, broaches and hairpins to capture the beauty of this insect.