The word ‘Naagin’ means a female serpent and there is a television series by this name, a supernatural fantasy thriller. Under Balaji Telefilms, Ekta Kapoor produced this thriller serial which dealt with the life of a serpent woman that shifts shapes.

These are not harmful serpents but those that combat the evil forces and retain the source of power, the ‘naagmani’ away from all occult forces. 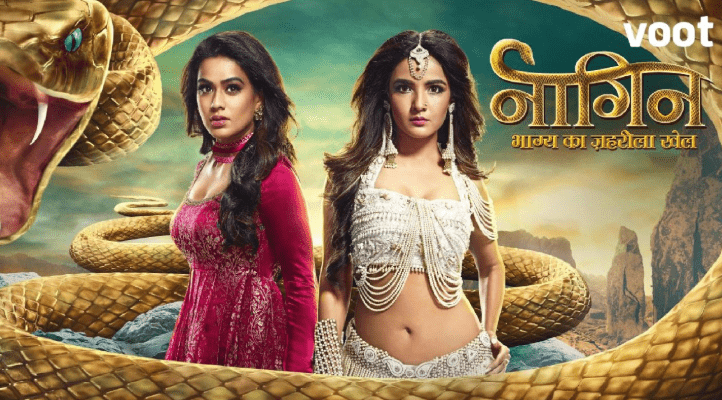 On 1st November, 2015, the first season was premiered and this season ended on 5th June, 2016 after completing 62 episodes. Starring Arjun Bijlani, Mouni Roy, Sudha Chandran and Adaa Khan, this was touted to the highest rated shows of Indian television.

Thanks to the love of the audience, the second season got aired from October 8th, 2016 and continued till June 25th, 2017 with 75 episodes. This second season starred Karanvir Bohra, Kinshuk Mahajan, Adaa Khan and Sudha Chandran. Mouni Roy, here played Shivanya, the extended special appearance.

The third season was telecast on 2nd June, 2018 and continued till May 26th, 2019 with around 103 episodes. This season had Surbhi Jyoti, Anita Hassanandani, Pearl V Puri, Rakshanda Khan, Rajat Tokas and Karishma Tanna in a special appearance.

The fourth season brought in a new title – Naagin: Bhagya ka Zehreela Khel and this was premiered on the 14th of December, 2019. Jasmin Bhasin, Nia Sharma, Vijayendra Kumeria, Sayantani Ghosh, Rashami Desai and Anita Hassanandani starred in this season.

As soon as the trailers of the show Naagin, produced by Ekta Kapoor began to air on Colors TV, viewers had already assumed that this is nothing but a new show that would retell everything that Bollywood has already told us about a shape-shifting Naagin or a female serpent. She must be in for some revenge, she must hate snake-charmers and their ‘been’.

Nevertheless, the response of audience and television rating points told a different story altogether. As there have been four seasons that have been completed since the time the first season was aired on television, wouldn’t you find out the reasons behind binge-watching this show all over again?

1) The show has got a fast pace

We all are familiar with the saas-bahu shows that keep on beating around the bush even when there is a small incident. They go on telling the same story for a week till the audience get bored.

Much unlike these stereotype saas-bahu serials, Naagin made sure, from the beginning, that the show should move at a fast speed so that the viewers stay hooked.

From the time the shape-shifting Naagin plotted an entry into the house of Ritik till her revenge, there is always fast pace. If you missed an episode, you’d feel like you’ve missed a strong hint of the puzzle.

2) The show has brought in new elements

The concept and idea of Icchadari Morni (shape-shifting peahen) or Icchadari Nevla (shape-shifting mongoose) might seem to be funny to the audience. But this can’t be denied that the producer and director of this TV series had made sure they bring in new elements of freshness into the show.

This effort was taken in order to ensure that the show doesn’t seem to be a remake of anything similar done in Bollywood.

3) The show also has a comic touch to it

In between the plot of Naagin’s revenge and the constant plotting of Yamini Singh to grab the Naagmani, the storyline could get a bit too heavy if the plot didn’t have its fair share of comedy. Ritik cracks poor jokes in order to lighten up the mood of Shivanya.

The antics of Ankush Raheja as he slips into the avatar of ‘maali’ to act out the exaggerated scenes which show Yamini Singh making fun with Ichchadari Morni add a comic touch to the show. This comic relief is necessary so that the viewers don’t get weighed down with serious stuff.

The popularity of the show couldn’t have reached to its present height if the actors didn’t perform well. The main female protagonist, Mouni Roy gives a stellar performance where she plays the vulnerable yet beautiful Shivanya. She instantly switches to her Naagin(darker) side where she slips into an Ichchadari Naagin.

The audience can’t help but appreciate the role of Sudha Chandran where she plays the cunning and passive Yamini Singh. Sesha, played by Adaa Khan is also a huge success due to her lovable expressions and the fact that she is the hot-headed sister of Naagin.

We can’t complete this list without mentioning the role of Kali Maa played by Lavina Tandon. From her costume to her expressions and dancing, she just killed it!

5) The show has a layer of mystery

There are sudden and unexpected twists and turns throughout the storyline that makes sure that the plot doesn’t get boring. While you’ll see Sesha, Shivanya’s sister standing by her side and smile, on the other side, you’ll find Sesha plotting a plan to kill Shivanya.

The maker of this serial also was tight-lipped about the fifth killer for a pretty long time. Who would even imagine that it was not Ankush Raheja but Yamini Singh who was pulling the strings and making things happen? Isn’t that a good piece of mystery for the audience?

However, when the third season was extended till 2019 February, the show lost the top position and soon got eliminated from the top 5 shows. Again, the fourth season topped the chart within the week of the launch.

Therefore, now that you’re stuck in your homes during the lockdown period, why not start binge-watching the show as soon as possible?