What’s Bollywood without romance! As long as Bollywood romances are involved, it was always about dancing around trees or the traditional boy-meets-girl format. However, over time, the format has gone through a major overhaul as the scripts have changed for the better. 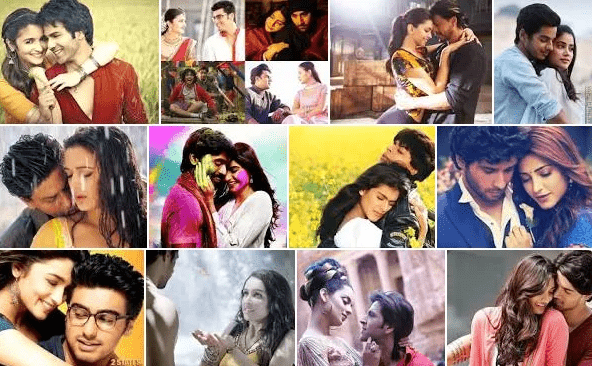 Now the feelings that could not have ever been described or defined have found their way into the characters. Here we’ll make you familiar with 15 of the best Bollywood romances.

This movie presents to you a refreshing and new take on romance, life, love and friendship. As DDLJ was of that generation, Yeh Jawaaani Hai Deewani is of our generation.

This film showed how you can fall in love, stay in love and still not be bound to sacrifice your passion, irrespective of your gender. Ranbir Kapoor and Deepika Padukone played the main protagonists.

You talk of Bollywood romances and you can’t complete the list without mentioning DDLJ. This is a cult film in the romance genre under the Yashraj banner.

Shah Rukh Khan and Kajol fall in love with each other and go through turmoil in their relationship due to the wish of her strict father to get him married to a spoiled brat. This is a Bollywood classic.

If you’re talking about classic, you can never forget the romantic classic tale of Mughal-e-Azam. This is a Bollywood movie that told the story of Anarkali and Prince Salim and how their ever-lasting love and respect for each other led to a civil war.

Through this war, a total empire was spoilt. They were successful in uniting all lovely couples who could stand up for themselves and say, “Pyar Kiya toh Darna Kya”.

Kuch Kuch Hota Hai was directed by Karan Johar and it has everything that was needed to build a tale of friendship, romance, jealousy, sacrifice and true love. Anupam Kher played a comic relief and his dialogues and antics will send you into fits of laughter. This is also a cult film in the romance genre.

This is a story of best friends in college, Aditi, a highly combative girl and Jai, the most non-violent person ever.

Though they dreamt of settling down after completing college but they never thought of doing so with each other. They never realize their feeling for each other until Jai finds a girlfriend and Aditi begins to miss his company.

This is probably one of the best movies made in Bollywood by Imtiaz Ali as it taught us new ways (showed by Geet) to laugh, love and live life.

As you watch the movie, you could instantly relate with Geet, the bubbly Punjabi girl who emotionally supported Aditya in getting over hsi break-up. Her character is of a sort that everyone would need in their lives.

This is a love story that transcended geography and time, thereby making the love story eternal for Veer and Zara. The movie will melt your heart even if you’re not a romantic.

If this film can’t evoke love in you, no other film can do so ever. This movie taught us to be selfless in love. Shah Rukh Khan and Priety Zinta played Veer and Zara respectively and Rani Mukherjee played the role of a catalyst here.

This again comes from the love guru of Indian cinema, Imtiaz Ali and it is his debut film. Despite being his debut film, it is still considered as one of the most romantic films of Bollywood. Two characters were set to marry each other but they refused to do so initially. Eventually, they start falling in love. The film is extremely real and relatable.

This movie, under the banner of Yash Chopra is everything that you need to know about the craziness of love.

Usually, we have seen that Yash Chopra movies always speak about love and this movie deals with waiting for that love, to which your soul says ‘Yes’! Shak Rukh Khan, Karisma Kapoor and Madhuri Dixit have done justice to their roles.

Dev Anand aces the character of ‘Raju’ guide in the movie ‘Guide’ with unmatched charm and heroism. This tour guide gradually falls head over heels in love with a woman who is already married and later on helps her reignite her passion for dance. Be prepared for an emotional roller-coaster ride with Guide.

You should never afford to miss this rare gem called Masaan. This story tells you about loss and love and it is an extremely sensitive film that delves deep into the insecurities and fears of human lives.

The love story of Deepak and Shalu is beyond the barriers of caste. Although the movie is not about happy endings but it will definitely teach you about the struggles of life.

This is a film about six couples who are newly married and their 4-day trip to Goa. As you can understand, there are several roles but the one that you can relate to is that of Shabana Azmi and Boman Irani. This middle-aged couple were insulted by people due to their second marriage.

Ranbir Kapoor is the lead actor and this was definitely one of the most relatable movies of our time. Sid (Ranbir) was a confused person who explores the intricacies of an urban relationship.

The character of Madhavan made us believe in the idea of love at first sight and you can never forget the way he passionately loved Reena, played by Dia Mirza. It taught us the importance to hold on to true love as it is hard to find.

This film gave love a new dimension as it dealt with the relationship between a mute and deaf boy (Ranbir Kapoor) and an autistic girl (Priyanka Chopra). Thanks to the power-packed performances, this movie will always strike a chord in your heart due to its unadulterated portrayal of love.