Home » Internet » A Brief but Fascinating History of Marketing and Lists

Have you ever read the book ‘The Hitchhikers Guide to the Internet’? It was written in 1989 and it is still the go-to source for fascinating information. In its day, it was a vital piece of information. Today, it is a great book to see how far we have come and all the areas in which the book was right. A little bit like George Orwell’s 1984, although that was never supposed to be an instruction manual.

The History of Marketing and Lists 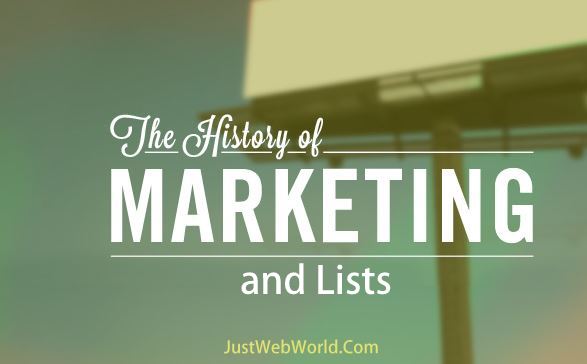 History of Marketing and Lists

Anyway, in The Hitchhikers Guide to the Internet, it say that people will start to stay up to date with information by signing up to so-called ‘mail reflectors’ or ‘mail exploders’. These are described as being electronic mailboxes that send any message they receive through to many other addresses immediately. Basically, every topic can create an instant discussion group. And that is pretty much exactly what mailing lists are about.

So who invented mailing lists? We know that they actually started to come into existence the minute that email was invented. It took no time for people to figure out that if multiple email addresses were combined into one, it would be much easier to send a single email to multiple recipients.

However, there is at least a bit of knowledge about mailing lists in their commercial form and their history. The first were carried on the Arpanet. They worked across SNDMSG, the very first ever email program. There were a few very specific mailing lists, which now truly belong in the hall of fame. They are:

If you are interested in these ancient lists, Google Groups has quite a few logs of human-nets, SF-lovers and several other groups. Interestingly, it is through these lists that Tom Truscott and Jim Ellis started to develop the Usenet, so that organizations that were not hooked to ARPANET could still benefit from it.

For years, there were just three pieces of software that actually enabled mailing lists. While there are more now, the majority continue to go through one of these three pieces. They are:

1. Listserv History, which was set up by Dan Oberst and Ira Fuchs, before being implemented by Ricky Hernandez. It was developed to help with the BITNET lists in particular. In 1986, a revised vision was developed by Eric Thomas.

2. Majoromo History, which was written by Brent Chapman, who took just 20 hours to complete it. It was managed across various versions by John Rouillard. Today, an open source group of developers work on this piece of software and they have enabled it to be functional across the internet. Chan Wilson maintains it.

3. Listproc History, which was developed by AnastasiosKotsikonas (“Tasos”), specifically for Unix computers during the 1980s. The development, which originated at Boston University, quickly became very popular. Today, it is even supported by CERN (Corporation for Research and Educational Networking).

So, Here We see the brief history of marketing and lists. I hope that you like this fantastic post, please share it on social media and don’t forget to comment below. Stay tuned and keep updated. 😀