Hardik Pandya married Serbian actress, Natasha Stankovic in July 2022 in an intimate ceremony after they announced their engagement on January 1.

Even though there were rumors about their linkup floating around on the Internet, it wasn’t confirmed until the announcement of their engagement. Here is a list of celebrities who were once linked with the famous Cricketer before he settled down for good. 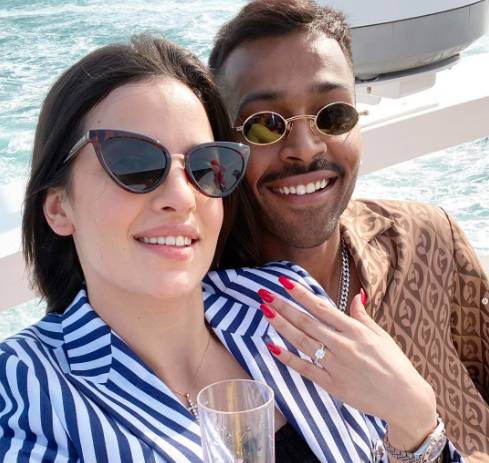 Pandya’s first alleged affair was reported with the Kolkata-based model, Lisha Sharma. The Cricketer even made his relationship public but later posted a story on his Instagram profile refuting any relationship claims. He said on his Instagram story that he just wanted to clear for once and for all that he was single and to focus on his game.

He also said in the same story that a rumor or a picture about his alleged love life takes away the focus from the work he does and is not just so that he would appreciate the rumored ending.

Hardik Pandya has been linked with several Bollywood beauties in the past, and one of such rumored relationships was between Parineeti Chopra and Hardik Pandya. This rumor was born when Parineeti posted a bicycle picture, captioning it, “The perfect trip with the most amazing partner.

Love is in the air”. Hardik commented on this post, “Can I guess? I think this is the second Bollywood & Cricket link. Great click, by the way,” giving birth to relationship rumors which were later confirmed to be untrue by both of them.

Model and VJ Shibani Dandekar were rumored to be dating Pandya when Shibani posted a congratulatory message for Hardik, who thanked her. At this, Shibani replied with a “Muahh, beast mode,” which linked them up, but these rumors later turned out to be just rumors without a grain of truth in them.

Hardik Pandya’s relationship with the Bollywood actress, Elli Avram was the talk of the town for the longest time. This relationship was public, and after they started dating, the two often accompanied the other to events and ad shoots. Both of them parted ways before the relationship could get more serious.

Esha Gupta was another Bollywood beauty that the Cricketer, Hardik Pandya was linked with. Stories were floating that the two of them met at a party and hit it off immediately with each other. It was rumored that the pair would make their relationship official and announce it and make it official, but the two of them denied anything of this sort.

The last Bollywood beauty that Hardik Pandya was linked with was Urvashi Rautela. These rumors took birth when the actress commented on one of the Cricketer’s pictures, but the actress later slammed any such rumors and ended it all.

These were all the beautiful celebrities that Pandya was rumored to be dating, but not all these rumors were true and were slammed by one of the two people.