One of the most successful and revered wrestling promotion of all time is WWE and this will always remain so. WWE is in its 39th year and has managed to deliver few of the most entertaining moments that will forever be cherished by its fans.

The Best WWE Superstars of All Time 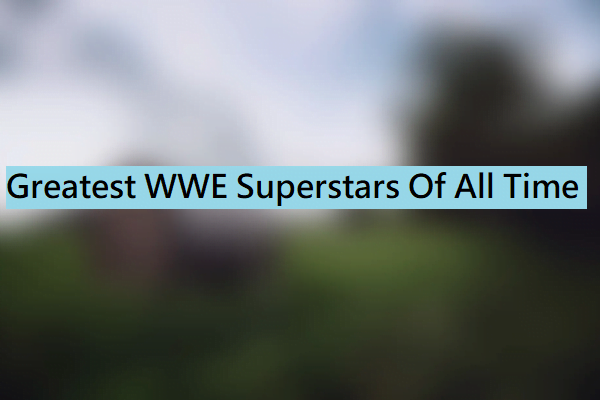 These splendid moments have been etched in our memories and they have also transcended generations with the strong portrayal of craft and emotion. WWE has produced few of the greatest wrestling superstars. Here are 20 of the greatest WWE wrestlers that you should know of.

His character is undoubtedly one of the most iconic ones that have been ever produced in the history of wrestling.

However, at the same time, Kane’s character is also heavily under-utilized. In spite of striving hard to earn a name for him, it was Glenn Jacobs who smoothly made his way as Undertaker’s half-bro.

The Ultimate Warrior had the ability to run with Vince McMahon’s biggest superstar just after Hulk Hogan. He was the one who won the title of WWF off Hogan during the main event at WrestleMania 6. Later he became the face of ‘Hulkmania’.

The Apex Predator of WWE had gained immense respect and good wishes throughout this entire career with WWE.

He was a third-generation pro wrestler and he has the ability to gravitate attention in anything that he does. He later on became a part of the faction in Evolution with Ric Flair, Triple H and Batista.

If you had to name of the greatest technical wrestlers of all time, Chris Benoit is undoubtedly one of them. In spite of being ridiculed due to his terrible actions, he still remains etched in the history of WWE.

He worked for different promotions like NJPW, WCW and WWF/WWE. His career span was of 22 years.

Brock Lesnar was definitely one of the dangerous performers who could ever step into the WWE ring. This is why he was touted to be the biggest attraction at the box office.

He enjoyed huge success as a soccer player, Brock Lesnar was also a martial artist along with being a pro wrestler. He played all roles with conviction.

He is hailed as one of the most generous wrestlers of the industry as his contribution to the wrestling business can never be described in words. It is for his ring-style that the Hall of Famer is recognized widely.

Cactus Jack, Mankind and Dude Love are parts of his awesome resume.

Eddie is one of the most talented wrestlers from Mexico and he achieved his top position due to his agility, perseverance and iconic artifice.

He had dedicated fans and the love of his fans played a huge role in elevating him to the topmost position at the WWE. He still remains one of the most idolized wrestlers.

There is no other wrestler who has contributed to the welfare of the company as Triple H.

He was revered for being one of the greatest minds in wrestling and he also changed the entire landscape of the developmental territory of WWE.

He was called the Phenomenal One and his ability to bring the best from his opponents and is one of the finest matches.

Hulk Hogan is one of the most famous wrestling heroes of all time. He was the face of WWF for nearly 10 years and he also went to lead WWE’s flagship show, WrestleMania and he did it for consecutively 8 times.

It is although sad that serious injuries had forced several superstars to opt for untimely retirement but for heroes like Edge, the legacy that they’ve left behind will always be remembered. He debuted in 1997 and gained accolades in his initial years.

Regardless of whether you love him or hate him, you can’t deny that his entry in WWE changed the business once and for all. By defeating Kurt Angle, he instantly made it to the heart of WWE lovers.

With his quirky mannerisms, Kurt Angle soon became one of the most technical wrestlers of WWE. His debut year was touted to be one of the greatest rookie years as he won the World Champion several times.

There can be no other wrestler in the planet that can exceed the charisma, the craft, the personality and the achievements of Ric Flair. He is probably one of the most professional wrestlers of an entire century.

The noteworthy contribution of C.M Punk to the world of WWE wrestling has brought about a welcome change to the company. The Cult of Personality signed for the WWE in 2005 as he spent his time in developing the company.

There has probably been no other WWE Superstar who was half as successful as Chris Jericho. His charisma, characterization and delivering abilities made him stand out in the crowd. He was a true rockstar.

Being the most loved wrestler of 21st century, Daniel Bryan always broke the glass ceiling that no one else could. He also did his bit to shift the landscape of the company.

There’s perhaps nobody in the wrestling business who ruled the business and entertained audiences as the Rock. He is hailed as one of the most successful WWE wrestlers of all time and has got an attitude to go crazy for.

The most idolized and recognized superstar of the wrestling industry is Stone Cold Steve Austin. He was the most lucrative star of Attitude Era and he is extremely entertaining for you to ignore.

Michaels’ initial tenure with WWE was incredible as he possessed more power behind the curtains as compared to any other superstar. Few of his mention-worthy matches are those with Bret Hart, Kurt Angle, Ric Flair, Triple H, Stone Cold and Undertaker.