Item songs have emerged in mainstream Bollywood since the 1980s. Since then, they’ve become a part and parcel of Hindi movies. 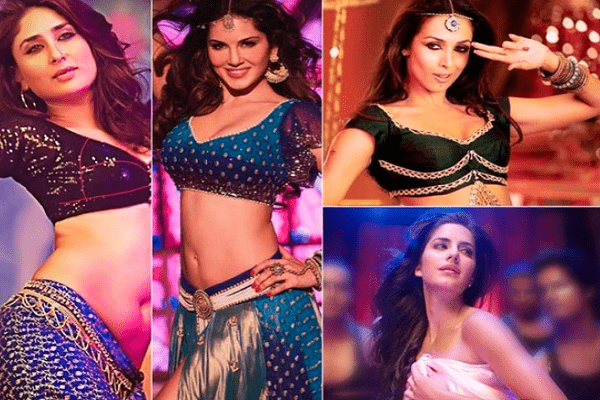 Even though item songs aren’t popular with the older generation, the young generation have started loving these catchy songs. If you’re a Bollywood buff, here are the few best Bollywood item songs that you shouldn’t miss.

This is an item song from Tees Maar Khan and since the song was introduced, it gained a great response from the audience, especially the Kat lovers.

Katrina has surprised people with her energetic moves. She seems to be inspired by Madhuri Dixit while performing this number and hence it became a hit among 90 million people.

Eli Avram is a Swedish Greek actress who is presently based in Mumbai. Her item song ‘Chamma Chamma’ was from the song Kis Kisko Pyaar Karoon and this song too became a huge hit among the young generation. It is a remake of a song with the same name where Urmila Matondkar had created sensation.

While the first Ek Do Teen starred our very favorite Madhuri Dixit, but this song that we’ve listed here is from Baaghi2 and Jacqueline Fernandez was the actor here.

Baghi 2 was a hit that starred Tiger Shroff. Disha Patani was the other heroine of this film but this song had Jacqueline in it.

Priyanka Chopra has given the most sensuous performance in the item number named ‘Ram Chahe Leela’ from the movie Ram Leela – Goliyon Ki Raasleela.

She was seen here in a totally different avatar and she took the audience by awe. Due to the smoking performance of Priyanka Chopra, this song became very popular.

Since this song was first ever released on December, 15th, 2011, it became a massive hit and a party anthem. Katrina Kaif was the lead here but the movie, Agneepath, also had Sanjay Dutt and Hrithik Roshan.

The song was sung by the supremely talented Shreya Ghoshal and Ganesh Acharya was the choreographer.

We all know how well Katrina Kaif dances and this is why most of the songs of this list are hers. The song Husn Parcham is from Zero that starred Shah Rukh Khan and Anushka Sharma.

This was the third song from Zero that was released and immediately it became a sensation.

Haseeno Ka Deewana is a recreated version from Kaabil starring Hrithik Roshan and Yami Gautam. The song had Urvashi Rautela in it and Payal Dev sang this song with huge valour while the rap was done by Raftaar.

The Bengali damsel, Mouni Roy did a great job in this item song called Gali Gali that was from the movie, KGF: Chapter 1.

The choreographer of this item number is none other than the most versatile Ganesh Acharya. He was also a part of the original song from Tridev.

The ever sensuous Sunny Leone danced to this number Pink Lips that was from the movie Hate Story 2. The artist behind this song is Meet Bros and this movie was released in 2014. The youth loves to groove to this Sunny Leone number.

Once the first song from the movie Pataakha was released, the makers of the movie released a new song ‘Hello Hello’ that featured the very hot Malaika Arora.

It is a peppy dance number that was sung by Rekha Bhardwaj and Vishal Bhardwaj was the composer of this song.

Chitrangada Singh just stole the show with her hot dancing moves from the item song ‘Aao Raja’ that was from the movie ‘Gabbar is Back’. With this song, Chitrangada Singh got a huge opportunity to strengthen her roots once again in Bollywood.

Munni Badnaam Hui was that song of Malaika Arora that earned her the nickname of ‘Munni’. This song topped the charts within a few days of releasing. She displayed her fitness throughout this song making it a huge hit.

In Dabangg II, Kareena Kapoor grabbed the chance to show her dance talent. She gave a memorable performance with her perfect figure and her sensuous moves to Fevicol Se. More than 105 million people viewed this song on YouTube.

After her hits ‘Sheila ki Jawani’ and ‘Chikni Chameli’, this is her third hit from Dhoom 3. Sunidhi Chauhan sang this song and Katrina Kaif made it perfect with her acrobatic dance moves. You’d love to copy her moves but sadly you can’t!

Kareena Kapoor gained accolades for her performance in this item number from the movie Don. This was a remake of Amitabh Bachchan’s Don and this was a Shak Rukh Khan starrer.

We know Deepika Padukone as one of the finest actors but with Lovely, she entered the periphery of item numbers. This song was from Happy New Year and she gained a positive response due to her superb dancing skills.

This is yet another famous item number from the movie Shootout at Wadala and it stars the very hot Laila.  Due to her exceptional performance, she grabbed many Bollywood films to prove herself as a star.

The artist of this song is Bombay Rockers and the movie from which the song belongs is Rocky Handsome that was released in 2003. Nora Fatehi, the latest sensation and belly dancer was the lead of this song.

Stree was a superhit movie that was released in 2018 and the artists responsible for this groovy number were Aastha Gill, Jigar Saraiya, Divya Kumar and Sachin Sanghvi. This was one of the massive hits of Nora Fatehi that made her famous in Bollywood.

This is the best party anthems that you could ever groove to. It is a Sunny Leone starrer and hence it is a big hit among the youth. This song belongs to the movie One Night Stand of 2016.