If you’re a cricket lover, Inside Edge, the out-and-out fictional cricket series based on T20 cricket team is the best series for you during the lockdown period. This Indian web TV series is based on Mumbai Mavericks that plays in Power League, the series that imitates Indian Premier League. 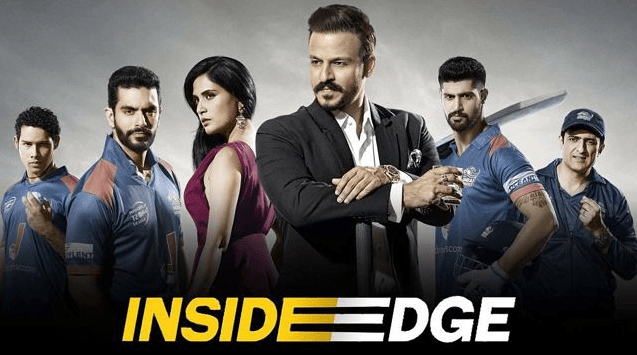 On the 10th of July, 2017, this cricket series was premiered on Amazon Prime. In fact, it is also touted to be the first Indian original series in Indian. Richa Chada, Vivek Oberoi, Tanuj Virwani, Siddhant Chaturvedi and Angad Bedi are the names that have made this TV series a big hit.

After the first season was premiered in 2017 July, it was received positively by the audience as well as the critics and was also nominated for Best Drama series in the Emmy Awards. Later on, the second season followed on the 6th of December, 2019 all over the world.

The storyline of Inside Edge

The Power League team, Mumbai Mavericks takes off to a rousing start to their game. The teammates are desperately searching for the next man in the huge stadium as they’ve just lost their wicket.

This star cricketer as well as teenage hunk Vayu Raghavan, played by Tanuj Virwani, is found busy pounding on a cheerleader and is also on the verge of orgasm. However, he is perfectly on time on the crease and hits his first ball for a sixer, straight into the crowd.

As soon as you begin to think that Inside Edge is just another glamorisation of the IPL, all your thoughts will soon be dispelled. Soon after the first few minutes of the first episode, the audience is introduced to another character, Prashant Kanaujia, which is played by Siddhant Chaturvedi.

He is a fast bowler belonging to an UP village and who is a newcomer. With the unravelling of the episodes, you’ll find shades of casteism, racism, classism, sexism and also barbarism of those who belong to a lower rank.

Richa Chadha plays the role of Zarina Malik and she presides serenely over the entire scene of Inside Edge. She is locked in the brawls with the evil Vikranth Dhawan, played by Vivek Oberoi.

The weakness of the Inside Edge Plot

One among the main weaknesses of the Inside Edge is the way it has portrayed cricket. The energy that is portrayed of the crowded stadiums and the extremely pulsating atmosphere all over didn’t get along well. The cricketing action too didn’t seem authentic enough.

If you’ve watched the recent biopic – MS Dhoni: The Untold Story (2016), you’ll find that they did a way better job in their portrayal of the matches. Although the subtitling had its own moments, yet there are too many clangers for a series with this quality and budget.

Inside Edge Series Cast and Characters

Things that’ll hook you to the series

Written and directed by Karan Anshuman, this web series is definitely a one-time watch that you could binge on during the lockdown period. Let’s discuss few things that can hook you to this series.

The screenplay of Inside Edge is amazing and hence each and every character gets its due attention and screen space. The story speaks of the glamorous world of cricket and the scenes that goes on behind the conference rooms of the owners of the team.

The message conveyed is that cricket is no longer about the game but it is more about money. This financial side of the game leads to unethical deals and double-standard principles.

Inside Edge is a TV series with a bunch of good artists playing their best roles and the names have already been mentioned above. Sayani plays Rohini Raghavan and is the team analyst.

She is present in just 2 scenes but you still can’t forget her beautiful screen presence in the two scenes that she acts in. Both Siddhant Chaturvedi and Tanuj Virwani were the surprise packages of the series.

If you minutely watch the performance of Zarina Malik (the fading superstar) played by Richa Chadha, you’ll be reminded of Preity Zinta and Angad Bedi’s cool style is similar to the then caption of India, MS Dhoni.

The role of Richa Chadha has been inspired from Priety Zinta and she is a 15% stakeholder in the Mumbai Mavericks team. Her career is Bollywood is about to vanish with just one film in hand. Prashant Kanojia is a rookie in the story but his skill is something to watch out for. He can do wonders with the ball.

Has the right amount of emotion and suspense

You’ll find a cliff-hanger in almost every episode and this is definitely going to compel you to watch the following episode.

There are scenes that will literally keep you at the edge of your seat like the suspense behind Dhawan’s buying of the Mumbai Mavericks team or Zarina’s race against time. In short, this show is undoubtedly binge-worthy and we assure you, you can’t stop at just one episode.

Packaged in a brilliant way

Overall, Inside Edge has been packaged in a rather brilliant manner with a tight, engrossing script, an amazing star cast, stunning sets and engaging, interesting characters.

This is a clear indication of the fact that the digital media is definitely here to stay in the near future and that the series has paved the way for several other upcoming web series.

In the second season of this Indian cricket TV series, a volatile Vayu Raghavan leads the entire team and later on faces their biggest possible adversary – Haryana Hurricanes led by Arvind Vashisht. Here too, you will find few scandals that will shake the world of cricket.

Here Zarina Malik teams up with Bhaisaab and threatens to destroy the total game in order to seek control of all of it. This too has an engaging plot that’ll make you stick to your seats.